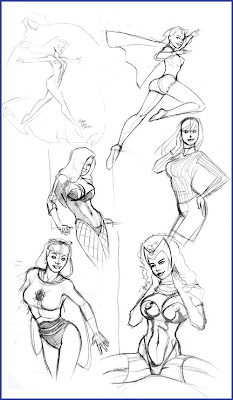 I haven't finished the Herculoids commission to a point for the next process post. And I don't want to rush it. So I thought I would share some sketchbook work.
If you thought the Canson Cuties were just slapped on the paper and ready to go, this will show you different. I treat commissions just the same as any other job in that I will do some roughs to get a feel for the character and a good pose. Also any image done on the dark Canson paper, like the Scarlet Witch image, had to be worked out tight enough in my sketchbook because I was projecting it to the final paper. I can't use my light table with the dark paper. The image doesn't show through. The Insect Queen pose was dropped in favor of the final one I auctioned. And there is even a Cloak and Dagger idea at the top that I have yet to use. Supergirl, at the top, ended up as a painted piece.
I hope everyone had a good weekend. More Herculoids tomorrow!
Posted by Gene Gonzales at 5:37 PM

Thanks for the peek into your sketch book Gene. You really ought to bring those things to cons and let folks take a gander in person. Of course then you have to make sure that no one walks off with it, but still it would be nice to see all the scribbles in person some time.
Hope all had a terrific weekend. Darn Monday is coming again. Wonder what causes that?

I used to have the BIG "alien" head looking Art-O-Graph, but that's been gone long ago...

...what projector do you use, Gene? I've been looking at some small ones for times I need one...not a lot, but there are those times...and canson paper is one of them.

Good idea Royce, maybe I will bring some with me to HeroesCon. Thanks! BTW, let us all know how Kevin is doing as soon as you know.

Hey John, I have an Artograph that is on a big arm over my drawing table. I only use it from time to time when I have to work on illustration board or anything I can light table. I don't know what model it is, had it forever. It only handles 4" x 6" paper on the tray. But that is enough for most things. I think there is a picture of it somewhere on an old post.

My drawing table is from Ikea. You have probably seen it, it's the kind that has a cut out area and glass insert so you can shine a light up through it. Well I made some brackets and mounted my light box under it. Works nicely. My old light table had a heavy duty base with a light area of 4' x 3'. BIG & HEAVY. Got rid of it when I moved down here. I like the old opaque projectors we had in HS. With the tray under the glass and it would work something like a light table. It had a crank to move the tray up and down, enlarging the projected image on the glass. I forget what it was called.

Royce is on to something, bring these sketch books to the Cons. I promise I won't walk off with it!

I liked the Insect Queen pose in the sketch book, even if you did not decide to use it. The Cloak and Dagger rough looks good.

Thanks for letting us all have a peak Gene!

I don't know Gary, there are some lemmings in those sketchbooks and we all know your obsession about lemmings. Gonna have to watch you. :)