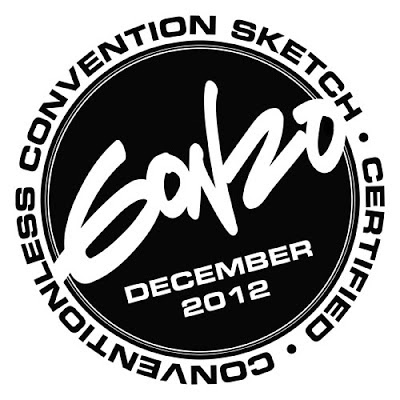 Tomorrow is the beginning of the Conventionless Convention Sketches. Below is the list of what you can expect to see over the next 31 days, and even more in January. In no particular order...

The TBA (To Be Announced) listings are situations where I have been given a list of characters to choose from and I haven't made up my mind yet or I haven't received the request. Either way it will be a surprise to all. :)

Above is a way too early warm up sketch inspired by a reference. :)

Conventionless Convention Sketches go live tomorrow. I am very excited about doing this batch. The end of the year, the end of the daily blog and just some really great requests. Speaking of that, I will be bouncing around the list as my muse dictates, so if you have not given me your request and/or you have not sent payment for your request, please take care of this as soon as possible. If you have any questions about either just shoot me an email. 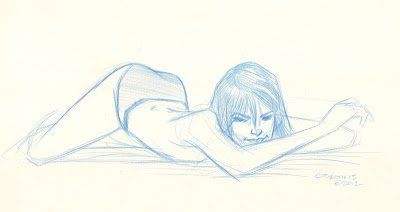 Warm up doodle from this morning. 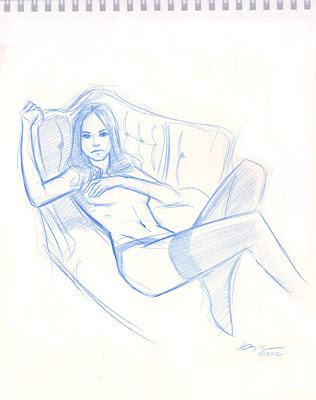 Just another Sketchbook Day. This is a warm up done from reference. 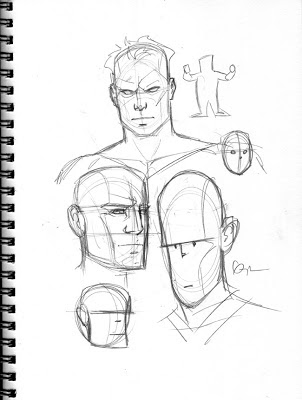 Just a Sketchbook Tuesday. BUT I have started on the first few Conventionless Convention Sketches. I will start posting this Saturday. 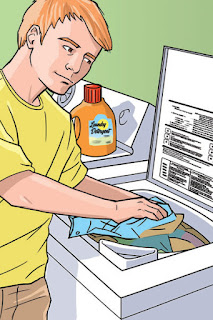 More commercial work. Counting down to the CCSs!

Posted by Gene Gonzales at 6:38 PM No comments: 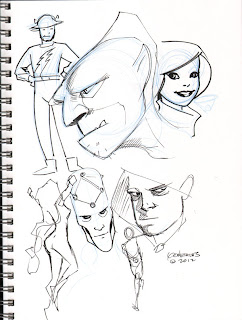 Just some warm ups done in my sketchbook this morning. A lot to do today. 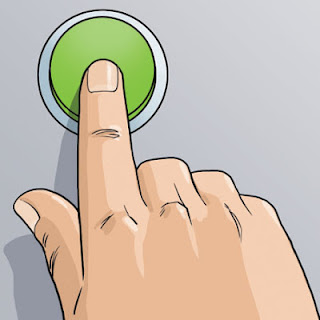 The next several days will be filled with commercial work here on the blog. This of course is leading up to the Conventionless Convention Sketches that I will start posting here next Saturday.

Speaking of next Saturday and the sketches, if you are on the list and haven't sent me your request(s), please do so as soon as possible. I tend to bounce around the entire list, letting my muse tell me which to do. :)

Posted by Gene Gonzales at 9:24 AM No comments: 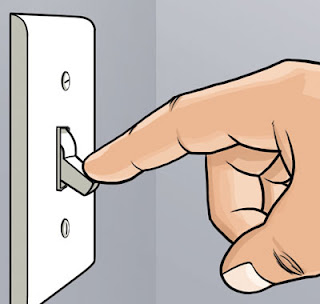 I hope everyone had a Happy Thanksgiving. Mine was spent working until we went out to eat. Then back to work when we got home. And I managed to finish up work that I needed to have done by Monday. Today I will be working on four roughs that are part of the next level in the series of books I am working on. Due by Tuesday. So I was up at 4:30am, made coffee, showered, dressed and walked the dogs. Ready at 5:20am to dig in. Have a good day folks.

Posted by Gene Gonzales at 5:20 AM No comments: 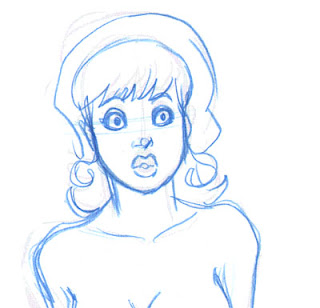 I am continuing work on a commission that I will have finished before December 1 and the beginning of the Conventionless Convention Sketches. Above is a detail of a new pose for the star of the commission.

The Conventionless Convention Sketches sold out in record time. I think it was just over 24 hours from the official announcement. A big thank you to everyone that is participating and to those that got the word out. I will post a list of the characters you can expect to see as soon as everyone gets their choices to me. I think I have 12 pending at this point. 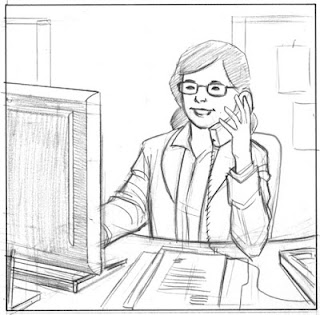 Another piece for the job. This one was killed. No fault of mine, the publisher changed their mind about the activity the person in the art would be doing. No biggie, these things happen. And it made for a better piece. You have to learn to go with the flow. :)

Posted by Gene Gonzales at 7:21 PM No comments:

Snoring by the iMac's Light. 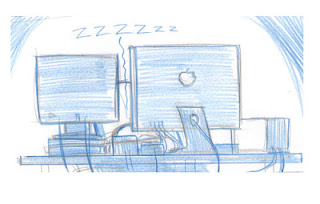 Yes, I missed my first daily post. The image above pretty much explains what happens after to many 18 hour days. And where I woke up this morning. :)

But come on, you gotta love the irony of posting the Conventionless Convention Sketches - Going Out With A Bang the day before. Ah universe, you have such a dark sense of humor. :)

Email ThisBlogThis!Share to TwitterShare to FacebookShare to Pinterest
Labels: Zzzzzzzzzz 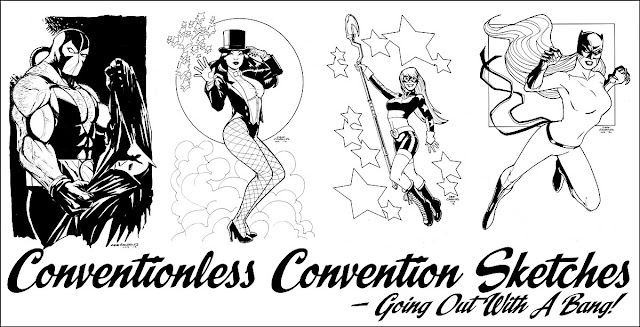 The final countdown is coming up. Though I will continue this blog after the new year begins, it will not be daily. My work load is moderate right now and I would really like to have the blog go out with a bang. Hence the subtitle above. So I am opening up a round of Conventionless Convention Sketches for December. So...

CONVENTIONLESS CONVENTION SKETCHES (CCS)! It's just like a regular con sketch that I would do for you at a convention, except no crowds, no convention hall food, no hotel bill, and no travel. And the price is the same as a show sketch. You only have to pay extra for shipping. Still cheaper than going to a show. If you have been waiting to get a black and white, inked single character sketch from me, now is the time to get it. If not for yourself, maybe you want a gift for that special someone? Holidays are coming up and the gift of original artwork shows how much you care. :)

Here are the details...

I am going to take a total of 30 commissions. Assuming I get 30 requests, of course. Any background elements will be at my discretion. I will begin working on the sketches December 1st and all sketches will be done by December 31st. Finished art will be mailed each Thursday. Payment is PayPal only. (No e-checks, please).

If you are interested, send me an email to gene_gonzales(at)mac(dot)com. Please use "Conventionless Convention Sketch" in the subject line and let me know what you would like. That address and subject line are very important. It helps me sort the requests from other emails. That email address is also my PayPal account, but check with me before sending money, please. I do reserve the right to turn down requests that I don't feel comfortable drawing. If you have any questions, please email me.

Please tell your friends, family, and local politicians. Tweet it on Twitter, Tumble it on Tumblr, Pin it on Pinterest, Face it on Facebook...Okay, that one didn't sound right, but you get the idea. Please get the word out any way you can. Thanks! :)

Posted above are examples of the last CCS I ran in April. 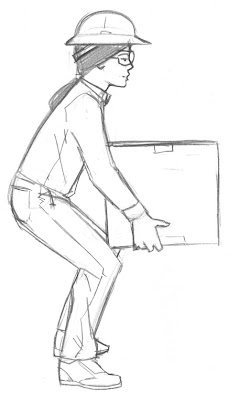 Remember, lift with your knees. :)

Posted by Gene Gonzales at 5:05 PM No comments:

Goblin Queen and a Bit of News 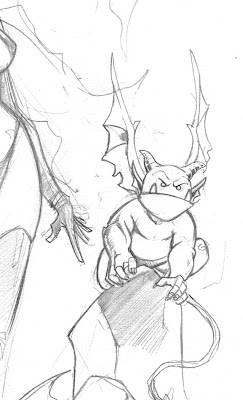 This is a detail of the Goblin Queen I am working on for fun. And speaking of fun, I have one more commission that I am going to finish up over the next couple of weeks. December 31st will be end of this daily blog and though my work load is still going to be keeping me busy, I thought it would be kind of cool to end the blog with a bang.

How to end it with a "bang" you might ask? Anyone interested in some Conventionless Convention Sketches? :)

More about this tomorrow. 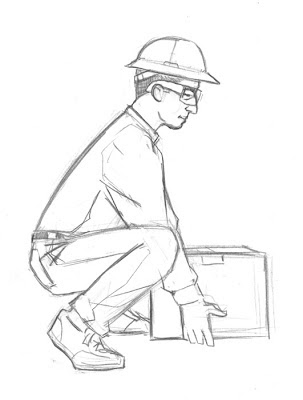 In the last 20+ years as a commercial artist, I have probably drawn how to lift things properly a dozen different times. Now it's a bakers dozen. :)

Posted by Gene Gonzales at 7:50 PM No comments: 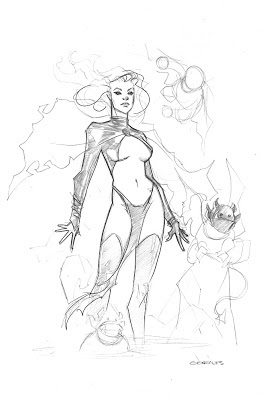 Lunch break sketch done in pencil on 11" x 17" Strathmore Bristol Board. I tossed on some digital inks but I think I will finish it in tradition mediums. Someday. :) 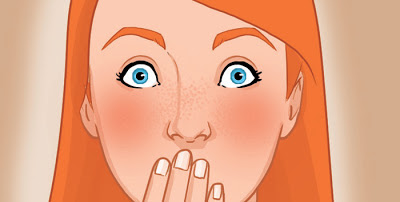 I showed part of this piece in the rough stages, here we are again but with some color. The actual job calls for the black line work, but for fun I wanted to color the line art.

Posted by Gene Gonzales at 7:25 PM No comments:

No time to work on much of anything but deadline driven stuff today. And tomorrow. Actually through next Tuesday. Sigh. Just a digital warm up digital sketch to get the juices going. Lots to do today. 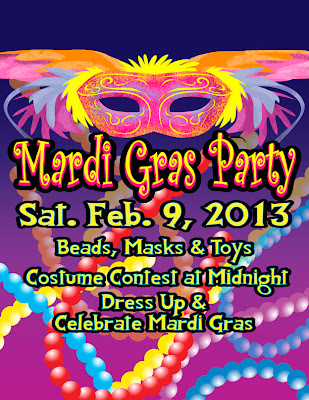 Switching gears again to some commercial with another flyer I created for a client.

Done in Photoshop and Illustrator. 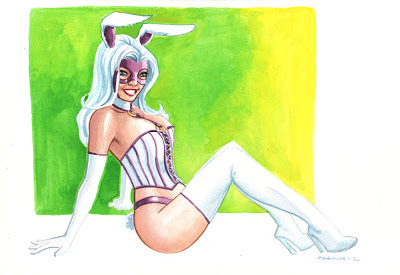 Another piece I managed to finish today. My lunch and dinner breaks are so productive. :) 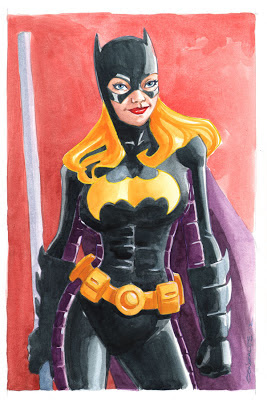 Finally finished her. Woo (and a great big) Hoo! Oh, and she needs a home. :)

Watercolor on 11" x 17" Strathmore board 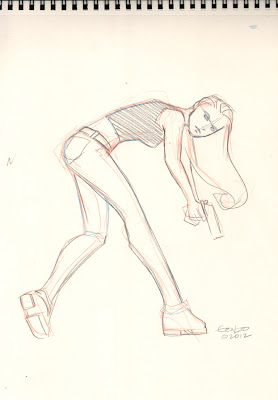 I finished up a rather large project today. Nice to put that behind me. At the same time I picked up another set of illustrations for a series of text books. I don't normally do cartoon/humorous illustrations in that field but I did some samples that must have been well received because I got the job. So far I have done 70 rough figures for the series of books with more that will be coming my way to do. Keeping busy.

Doodled this piece this afternoon. I am attempting to develop a variation on my style. It's a hard process to do this because I keep falling back on my default style. More work ahead. 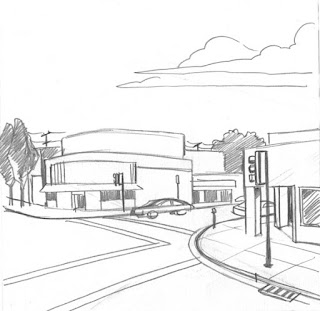 More commercial roughs to do today. Yup, I am that busy. :) 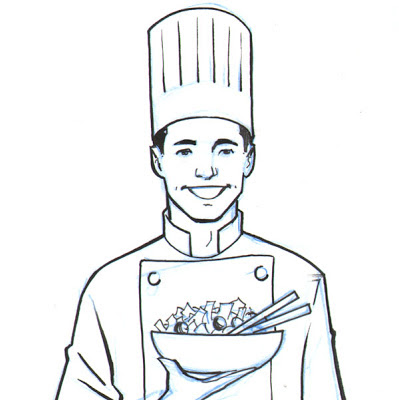 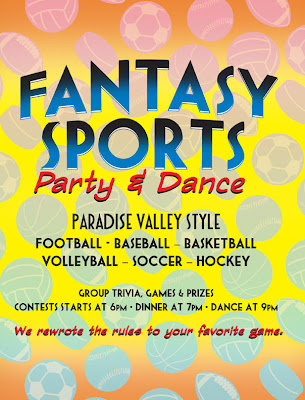 An example of some of the other work I do commercially. I do all (?) the promotional art and designs for a resort. I have been handling their art needs for a dozen years I believe. It can be very simple pieces like flyers to complex pieces like doing maps of the resorts expansion. All in all it's fun and they are a great group to work with. This is just one of about 40 different themed parties that I have designed flyers for and I still have 3 or 4 to go.

All the sports balls (and puck), and type were done in Adobe Illustrator. Color added in Photoshop.

Posted by Gene Gonzales at 5:46 PM No comments:

Commission Work In Progress - Even more! An rough approach to the main character of a commission piece. Not working out so much at this angle. Gonna try a straight on shot that I think will work much better. 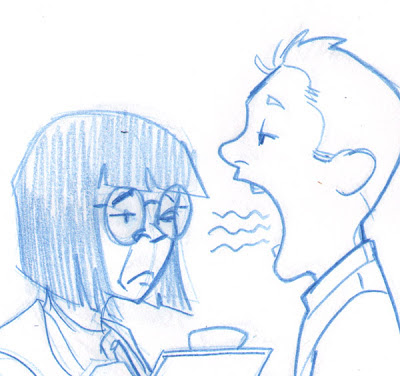 Posted by Gene Gonzales at 10:19 PM No comments: