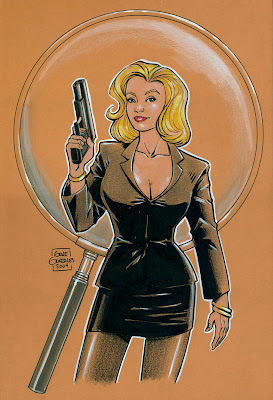 I did a great deal of work for Caliber Comics back in the 90s. It was a really cool time to be in comics in that we were all having fun. I mean, we were making comics, how cool is that? I got to work on some very cool titles at Caliber. I did Negative Burn, Dominique, Dead World (trading card), Apparition, War of the Worlds, Raven Chronicles, Mister X, and The Maze Agency for Caliber.
When I heard that Caliber was talking to creator Mike Barr about publishing Maze Agency, I was immediately let my editor James Pruett know I wanted it. Luckily, Mike liked my work enough to approve of me joining him. Mike provided me with some copies of Alan Davis's design work, Adam Hughes' design work for the series and a really cool script. I was a fan of the series before so I was excited to be working on it. Mike Barr great to work with. We had a few conversations on the phone and he was always professional and provided a welcome constructive critique. Good times. It was too short a run though. The last time I talked with Mike was when IDW published a 3-issue run of Maze a few years back, to wish him and the series the best. I still think it would make an outstanding TV series. I don't know why no one has picked it up. And if Mike Barr ever calls and says lets do Maze Agency again, I will be ready.
Thanks to Steven for the Jennifer Mays commission and for taking me down memory lane.
Posted by Gene Gonzales at 7:22 AM

The Maze Agency has always been one of my favorite comics. Mike Barr put so much heart and soul into his characters, and having the luck to have great artists illustrate his stories!

Gene, thanks for bringing back sweet memories..!

I agree LUD! Mike made the characters real. As much as I liked the mystery, it was the characterization that stood out for me. I did prefer the more realistic style for the book, myself. There were a few cartoony artists, who's work I really like, that didn't fit for me on the series. I tried to get back to the Alan Davis/Adam Hughes vibe when I drew it. Thanks!

WOW! That is spectacular! Really great work Gene! The colors are so vibrant, it practically jumps off the page!

Absolutely stunning! Has to be in the top ten of the Best Gene Gonzales art of all time! Really! Wow!

Love the detail on the magnifying glass! Oh..Jennifer is pretty all right too!

Your love for the character is obvious [that or you faked me out] ... very nice!

Very nice, Your love for the character really shines through both in the art and the description. One of your best!

I'm surprised you noticed her Royce. ;)

No fake out Craig, a real fondness I have for the characters. Thanks!

Another spectacular commission, Gene -- the inclusion of the magnifying glass as a background element is genius!

I'm not familiar with the character, but, after seeing your take on her, I'd sure like to be!

And I'm really enjoying the use of color and the additional details you're incorporating into these Canson Paper pieces!

Add me to the list of Maze Agency fans. I was very disappointed that the IDW revival only ran three issues (it had been solicited for four).

Thanks Michael. Funny the Caliber series had the same run. 3 done, 4 solicited. I even painted the cover for the fourth issue that never was created.

The original arrived today and and it was a real thrill to unveil it. The addition of the magnifying glass as a background to reflect the detective side of the character is brilliant. I won't wait five years for the next one.
Best,
Steven