There are no bras in space! 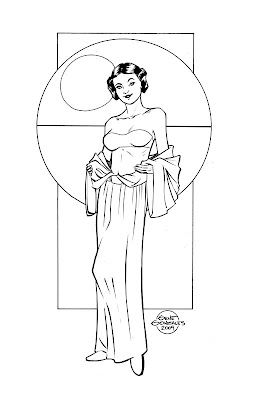 In the title of the post today, I'm paraphrasing something that Carrie Fisher has said she was told by Lucas. But for our purposes here at the blog, there is a space bra. Yes, digitally added. Thanks to Jon for today's Conventionless Convention Sketch. As I told him, if I get asked to draw Leia, it's always the metal bikini, so this was a change that I really enjoyed. Thanks again Jon!
The slave Leia obsession is something I find interesting. Seems you had to be a certain age when you saw her for it to have the impact. When Return of the Jedi came out, I think I was just past that age. While I remember her in the outfit, that's really it. I have friends a few years younger than me that remember that part of the movie very fondly. ;) I also find it interesting that Leia seems to have become the "real" person. I have never heard anyone say "Remember when Carrie Fisher wore that metal bikini?" or "Carrie Fisher looked hot in the slave outfit". It's always about "Leia". I wonder how many other characters have made that leap in pop culture?
A couple of other tidbits this piece made me think about: I remember seeing the original title "Revenge of the Jedi" on posters around the San Fernando Valley. They were teasers and this was before the title was changed for a more positive tone. Also, it was around 1983 that I worked for a liquor store that was part of a chain of 43 stores in the L.A. area. My store was in Toluca Lake and our house accounts included Universal Studios, The Burbank Studios (as Warner was known back then) NBC, CBS, Bob Hope, and a wide variety of stars, both young and old. I met a lot of stars while I worked there. It was at the store that I met Debbie Reynolds (Leia's mom, er, Carrie's mom). I helped her plan a party and delivered everything to her house. I went back to her house a few more times while I worked for the store. She was a very nice woman. In her stage shows, she would introduce herself as Princess's Leia's mom. I find that very funny. :)
Posted by Gene Gonzales at 6:54 AM

Nice sketch, and great story, talk about a brush with fame! I'd love to hear George Lucas defend this 'no bras in space' theory.

Great pin-up and the Deathstar background is a nice design element.
I remember seeing cast interviews recalling working with Lucas and Ms Fisher retelling the no-bra story. They all said George had them running around alot and his direction would be run faster and more intense....I'm sure Carrie was in most of those scenes :)

Wow! Excellent sketch and excellent story Gene! It looks like you did this entirely in brush (except for the background)--am I correct?

Like you, I did not get the Leia metal bikini obsession which seems to be remembered to this day, and very affectionaltely, by a lot of folks.

Your story about seeing the "Revenge of the Jedi" posters is neat. I always read about the original title, but never knew someone who remembered the poster.

Any chance to get another uncensored scan?

Have a great President's Day!

I love Star Wars as do most of the guys I know, and although I like the scene quite a bit, Leia was never a huge draw for me. That being said, this is a beautiful pic! Would love to see an uncensored scan as well. I do get a kick out of watching cosplayers wear this outfit at cons though. Seems as if there is always one around if you are patient enough, kinda like waiting on a bus.

I do remember reading one story about the shooting of the scene. The guys working Jabba had an amazing view apparently of Carrie's privates. The metal bra wasn't form fitting and as such whenever she leaned forward, fell away from her body. Couldn't tell from the front apparently, but from the side and back where the puppeteers were situated......smiles all around.

Thanks Brian! Carrie was on NPRs news quiz show WAIT, WAIT, DON'T TELL ME, and she had a few good stories about the making of the movie. One was how Alec Guiness offered Mark Hamill £20 to go away. Mark is a film buff and was asking too many questions of Guiness and his career. And yes, he took the money. :)

Yes LUD!, brush work it is. Next week I will be getting some new handmade brushes from a small company in the UK. I am quite excited to get them. The maker is highly recommended! More when they get here.

Gary - I remember seeing the poster early on (with the hands holding the lightsaber), but then when the movie promotion was in full swing and I saw the new title, I thought I had misread it. Later I found out that it was indeed changed. Hope you enjoyed Presidents Day as well.

Royce - There is one really beautiful girl who dresses as slave Leia at various conventions. Her picture comes up if you Google. I never paid much attention to the girls dressed up as Leia, but this girl makes you take notice. I think I read she is some comic creators girlfriend.

On NPR's WAIT, WAIT, DON'T TELL ME, Carrie told that story about the bikini not being form fitting and how they "could see all the way to Florida".

Good old Vendome! Cool story too. I remember hanging with Persitza and catching the 3 AM show the first night ROTJ opened down in Hollywood.

Yeah, I was only there a little over 2 years but good times. One of the times we went to Napa was when I worked there. Persitza and I caught the 3am show of Empire Strikes Back at the Egyptian on Hollywood when it opened. We went down there for tickets around 1pm and the line was already down Hollywood, turned down and side street and turned around the next corner. We parked and stayed for over 12 hours. Hollywood crowd was fun though. Thanks Dave!