Today is a double shot of Conventionless Convention Sketches. And this wraps it up as well. First up is Dream Girl, member of the Legion of Super-Heroes. As always, I really enjoy drawing the Legionnaires. And unfulfilled dream of mine is a chance to draw the Legion of the 1960s or the 1970s. Ah well. 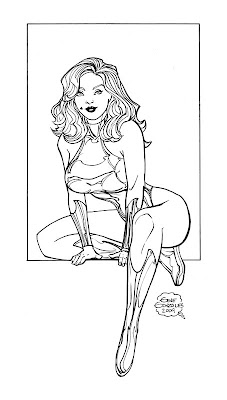 Next up, another favorite of mine, Wonder Girl. I really don't know the Donna Troy of today's comics, but I loved the Wonder Girl of the original run of the Teen Titans. Artist Nick Cardy could do no wrong as far as I am concerned, especially when he drew Wonder Girl. Thanks to Tim for both of these commissions. Both are ink on 11" x 17" Canson bristol board. 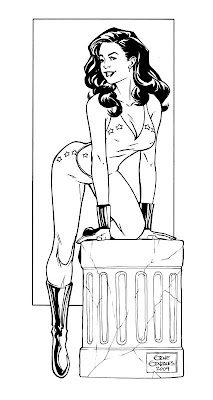 That wraps up the Conventionless Convention Sketches for now. Thanks again to everyone who commissioned art and to those that stop by with the kind words. The next round of sketches will probably be at HeroesCon in June!
Since I have been posting so many finished pieces, I'm going to start sharing some rough sketches and ideas over the next few days and sometime next week I will be starting a commissioned painting of the HERCULOIDS!
Posted by Gene Gonzales at 7:54 AM

Gene, of course you save the best for last! Two of DC finest beauties!

I, for one, would love to see you fulfill your dream of doing the entire membership of the Legion (in both '60s and '70s costumes)!

Looking forward to the Herculoids!

Everything LUD! said x10! That is some magnificent art, Gene!

Wow! Back to back Grand Slams!!! What did you have for breakfast this morning Gene!

And of course, love the signature blocks.

The Herculoids!!!! Ah, a blast from the past! Can't wait to see!

I agree with what has been said above me. Two great ones to end on!! That lucky Tim!! Was going to make a crack about Donna taking out the trash, but couldn't bring myself to do it, the pic is just perfect! I agree with the Cardy viewpoint. He is a true gentleman and a terrific artist to boot!! I am sorry to see this batch come to a close but it did have more pieces than any of the other batches before it I think. HeroesCon is 4 months away but I am sure it will fly by and be here before we know it! One good thing about the latest Legion series is that it ended on an up note with Dream Girl being resurrected by Brainy. I do so miss the 60's and 70's stories though, so I might dig out the Showcase Presents anthologies tonight!!

Very nice and a great way to end this round of Conventionless sketches! Heroes con in 4 months..hmmm