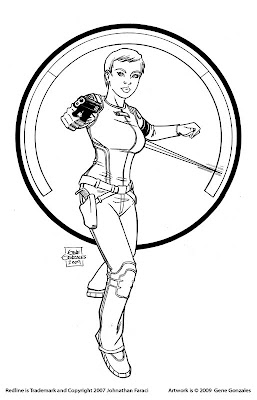 Conventionless, Convention Sketches almost always have a least one creator owned character in the batch. And Redline is it in this one. Jonathan commissioned me to do my take on his character. I don't know a lot about her, other than a style sheet he sent, but she seems to be a member of the Chicago Special Police. And she appears to have some super speed powers. Hence the name. She is more action woman than vixen, so I thought her pointing the business end of her sidearm at some perp was appropriate. This is ink on 11" x 17" Canson Bristol Board. Thanks again Jonathan!
Posted by Gene Gonzales at 7:35 AM

Obviously, I don't know the character, but the piece came out great! I really like it!

Just wanted to thank you publicly for this awesome commission.

My pleasure Jonathan! Thank you! BTW, have you been getting my emails? I sent you a scan of this yesterday.

I did get your email yesterday -- but it's been unexpectedly hectic week at work.

I just emailed you with my thanks (and details on the second commission) a few minutes ago. I'm really looking forward to seeing your take on it!

Seeing the art makes me want to get to know the character better!

Again, like the background image, adds to the overall appeal of the piece.

Always like to see the original characters. Jonathan, is this character for a role playing game or is she appearing in fiction somewhere? Love the background logo!!

Gary, thanks for the kind words about Redline. You can learn a little more about her at www.redline.ws and there is some more art here:
itsago.deviantart.com

Royce, Redline isn't appearing anywhere yet. She's the lead character in a webcomic I'm in the process of developing.