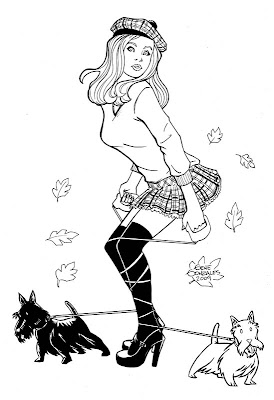 Today's offering was requested by Royce. He asked for a red haired Scottish lass and mentioned he owned Scottish terriers. Instead of a bar maid or renaissance dressed lass, I went with a young lass walking her dogs. Which meant I needed to figure out quickly how to draw the terriers. But I think it worked out nicely. I believe this one will make a nice print sometime soon. Then we can actually make the poor girl a red-head. Thanks Royce for this commission and the Lady Blackhawk too. This is ink on 11" x 17" Canson Bristol Board.
We are starting to wind down on the list. Tomorrow I will post a Legion of Super-Villains piece, featuring the three founding villains, and then there will be two more after that I will finish and post. In addition to those pieces, three more pieces will be done this week but I'm afraid those won't be posted here. I had planned on 20 sketches by the 26th, but it ended up 28. Still should hit the mark though.
And a reminder I will be wandering the aisles of MegaCon on Saturday. I have already been contacted about meeting up with people who want to see the original art that I am bringing. And a couple that are picking up their requests at the show instead of me shipping them. So anyone interested, just send me an email and let me know.
Posted by Gene Gonzales at 9:11 AM

Thanks Gene for such a terrific commission. I think it is hard ti imagine these as convention pieces, but your pieces at shows are equally as nice I think. I hate to hear that the list is winding down, as it is always fun to see what gets requested and also how you interpret them. It is a shame that your last three won't get posted. Is that due to the request of the commissioner or is there another reason. I am hoping that you can reconsider and share them. This batch has seen some really great pieces. Can't wait to catch you at HeroesCon, but in the meantime, have fun at MegaCon next week. Wish I could be there. Thanks again for the Scottish Lassie!! She's quite the lovely one and the dogs are spot on! I'm beholdin' to ya.

Great Scottish lass, I can easily imagine the red hair and the red plaid skirt! Like the signature on the leaves!

Agree with Royce, I'd love to see the last three commissions, but respect if the requestor(s) said not to post them!

Another great commission, Gene -- way to take Royce's initial idea and run with it!

Hopefully, you'll debut the color version here when if/when it becomes a print.

I'm looking forward to seeing your take on the LSV!

Thanks Gary. I decided the last three wouldn't be posted based on the subject matter. I don't find it objectionable but others might. So best play it safe. (I will probably share with those who ask.)

Thanks Jonathan. You bet I will share the color version here when I finish it. :)