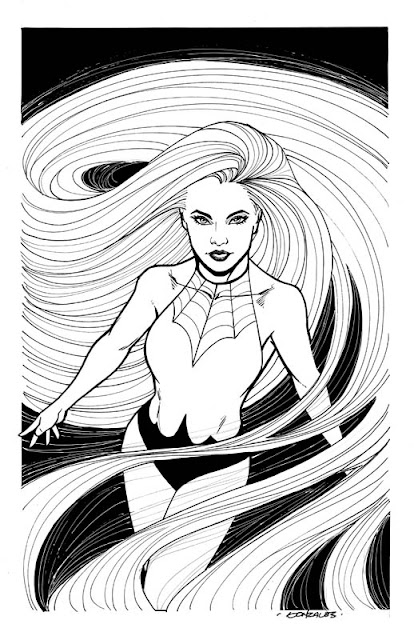 Spider Girl tried out for the Legion of Super-Heroes way back in Adventure Comics #323 (1964). Her power is not spider based, it's having wild hair that can do her bidding. Unfortunately she almost killed a couple of Legionnaires during her try out. She later joined the Legion of Super-Villains and even later became a hero, if I remember right. This outfit is based on the Mike Grell update of her original costume.

Posted by Gene Gonzales at 7:16 PM

I really like the series you have going here. Lots of fun. I forgot about some of these characters.

Love it! I really dig the flow of the hair.

Little John - Glad you are enjoying these. There are a few more I will probably get to over the next couple of days.

Thanks Travis! You are the one who got me going down this road. :)

BTW, I recently acquired a full run of Legion of Super-Heroes in the 31st Century (the animated series tie-in) and in #16 they devote a full issue to Arm-Fall-Off Boy! It's hilarious! He gets a flight ring and it makes his arm float off into the sky. The whole series is pretty fun but #16 and #3 (The Subs!) stand out as some of the funnest Legion comics I've ever read.

I have the first trade that was put out and I enjoyed it. Fun stuff.

She is awesome, Gene-! I have always liked this character. She appeared WAY before Medusa of the Inhumans, too. Did you know that?

I went to the Baltimore Con this past weekend and am glad to see all the Legion-y goodness here when I finally got a chance to sit for a sec at the computer tonight. Wow! Great stuff Gene!

Thanks Royce! Hope you enjoyed the show!