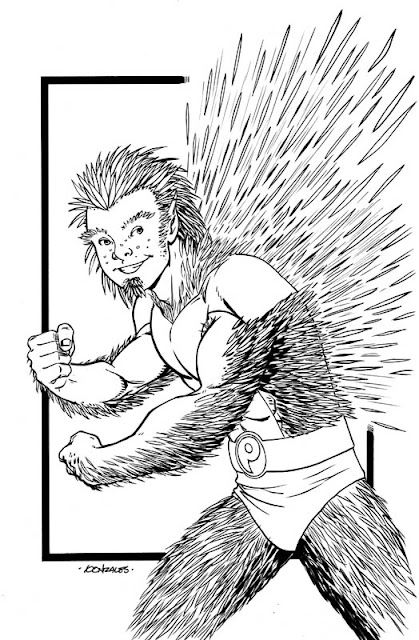 If you are not familiar with the Legion of Super-Heroes, there is a time honored tradition of heroes wanting to join and being subjected to a try-out. Most fail miserably. Most common reason for rejection: Applicant can't control his or her power. Then there are those like Arm-Fall-Off Boy. Don't ask.

Porcupine Pete falls into the majority of applicants that can't control his or her power. He didn't know how to aim his quills. Sending heroes, villains and bystanders diving for cover every time he uses his power isn't going to cut it. Even as kid I wondered why the Legion didn't screen these applicants better. They should never even get to the stage of endangering anyone in a try-out situation if they can check the box on the application that says "I have complete control over my ability". But then we wouldn't see applicants like Eyeful Ethel. Don't ask.

A couple of days ago I used Twitter to crowd source for ideas for blog posts. I got a number of good ones. Porcupine Pete was suggested by Travis. I believe Porcupine Pete was created by Cary Bates and Dave Cockrum, but don't hold me to that. Thanks for the suggestion Travis! (Travis also owns this piece as of this writing)

I inked the piece with a real brush. Not a brush pen or a marker. Not that it's a big deal. I used to always ink everything with a brush. But then brush markers got so much better and I started messing around with those. This was a back to basics piece. I had fun doing this way and I ordered some more brushes since I finished this piece.

Below is the rough sketch and the pencils for this piece. 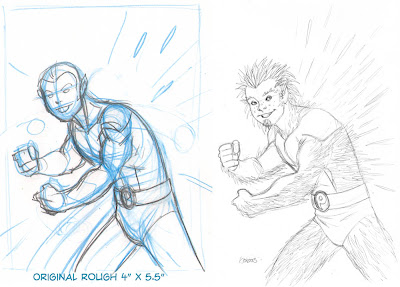 Have a good weekend everyone!

Posted by Gene Gonzales at 2:01 PM

This is great! We don't see enough of these heroes. And ther's nothing wrong with Arm Fall Off Boy. His arms make convenient weapons. ;)

I agree with Little John. Unfortunately, the cost of using such powers was just too expensive. Usually priced at "an arm and a leg," even a 50% discount would still cost you an arm.

Thanks Little John. Didn't expect any love for Arm Fall Off Boy but you surprised me. :)