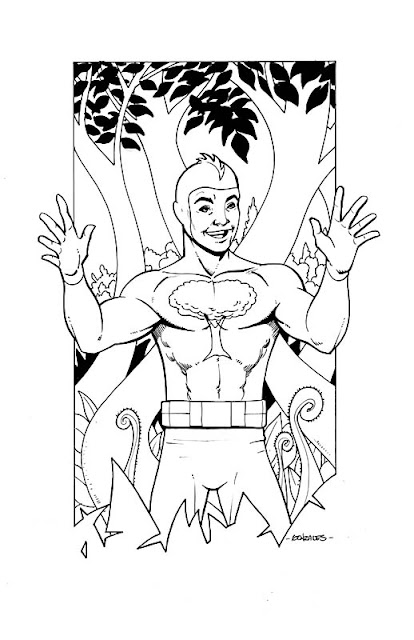 Chlorophyll Kid is another founding member of the Legion of Substitute Heroes. He has the ability to make plants grow really fast. Yup, that's it. He carries a variety of seeds around too, just in case a particular plant is needed. Once he tossed some catnip seeds to the ground, made them grow, and used it to distract Streaky, the Super-Cat. Poor Streaky never had a chance. As they say, "If you don't tell your cat about catnip, who will?"

I've never been a big fan of what was done to the Subs in later years. Except when Ty Templeton drew it. When Chlorophyll Kid was drawn with an extra 80 pounds and put in the goofy tree suit, I really didn't care for it. Yes, the Legion of Substitute Heroes were goofy in powers, names, and costumes. But no more goofy than some Legionnaires. So to draw this piece, I went back to the simple costume that the Kid wore in some of the Adventure Comics run. Let's have a little respect for the Subs, shall we. :)

Posted by Gene Gonzales at 3:34 PM