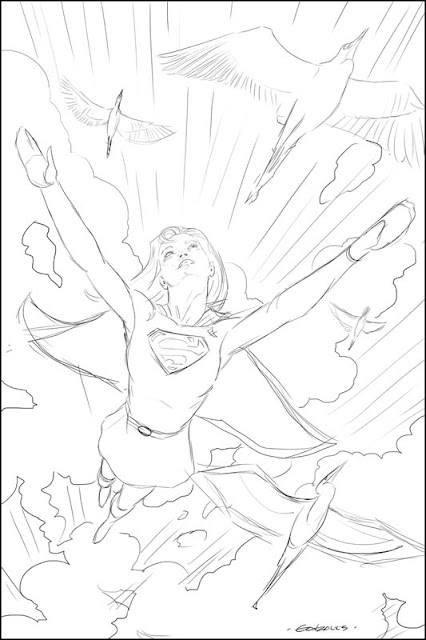 This one came to me in a dream. Almost. A few nights ago as I was drifting off to sleep I had this image of Supergirl flying. Mostly I saw her face almost exactly how I drew it above. I worked on that face for hours. Starting in my sketchbook, scanning that, redrawing it in Photoshop a few times on different layers till I got it where I wanted it.

The figure in my head was to be much larger. Her arms would be extending off the page, her body filling the board and her face being the focal point. But I modified that idea as I started to draw. The rest of the piece came to me as I was drawing it. Then I thought this would be a fun "variant" cover of Action Comics 285, buildings on each side of her, crowd cheering and Superman flying behind and to her left. Instead I went with her flying with birds. Egrets to be exact. I don't know if or when I will finish this, but I'm glad I got the idea down. And it spark other ideas.

While doing all this I thought of a couple of variant themes for comic covers. One being where you take the back up feature and make it the cover feature. Or take any cover and come up with a way to make it into a DC romance cover. I did a quick example below of the romance angle. It's a story where Matter-Eater Lad leaves the Legion. It new concept doesn't have to be a real scene from the story, just take the story and twist it a bit. Flopping the lead for this book would mean the Shadow Lass/Night Girl back up story would be on the cover. Fun idea?

Side note: This published cover actually did mix up the lead and back-up titles. "Last Fight for a Legionnaire" was the lead. 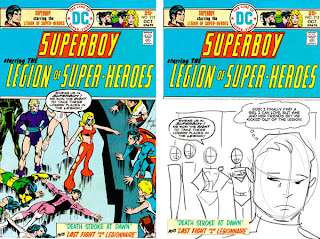 Superboy and the Legion of Super-Heroes © DC Comics

Posted by Gene Gonzales at 5:46 PM

This is straight-up beautiful.

hope your gonna go back and finish your take on the SB&LSH cover Gene, i like the pre-lim so far.

I like the variant cover theme idea. That sounds like a great challenge project for a bunch of artists that could get collected in a con sketchbook or something along those lines. And that Supergirl is BEAUTIFUL! Can't wait to see that one finished.

Thanks John, I will get around to it very soon. I really like both ideas for cover variants and would like to try to do at least one of each. Even if they are not commissions.

Royce, Yeah my idea is that different artist would do them. Much like the ones that Aidan has commissioned where he has artist redo classic covers as Legion stories: http://genegonzales.blogspot.com/2010/09/justice-legion-of-aliens-60-final-1000.html

Supergirl will probably end up being finished digitally. Thanks!