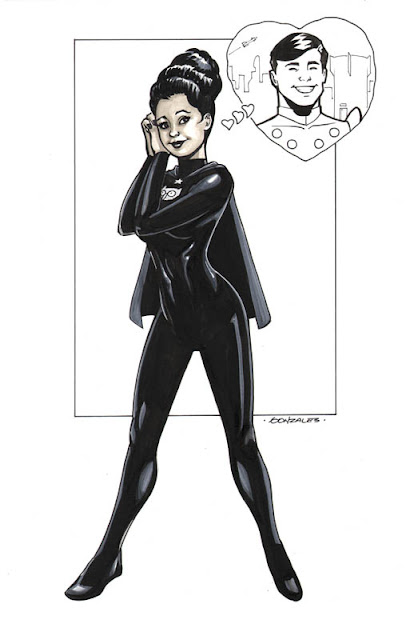 Night Girl comes from a planet that is in perpetual darkness. Her scientist father gave her super-powers, and because of a crush she had on Cosmic Boy, she tried out for the Legion. Unfortunately her powers only work in darkness or deep shadow and she was rejected. Night Girl then became one of the founding members of the Legion of Substitute Heroes, a group of Legion rejects who have proved themselves as a valuable resource for the Legion of Super-Heroes on more than a few occasions.

Posted by Gene Gonzales at 4:33 PM

It's funny, but Michael Dooney just did a Night Girl piece as well...!

Is she wearing an owl necklace???

Not familiar with this Legionnaire, but it seems to me she would have been a great night covert member for the regular Legion.

Love it! All the details of the character are captured perfectly.

Gary - She has an stylize owl face on her chest. And a star clasp for her cape. She was rejected because any villain with a flashlight could take her powers away. :(