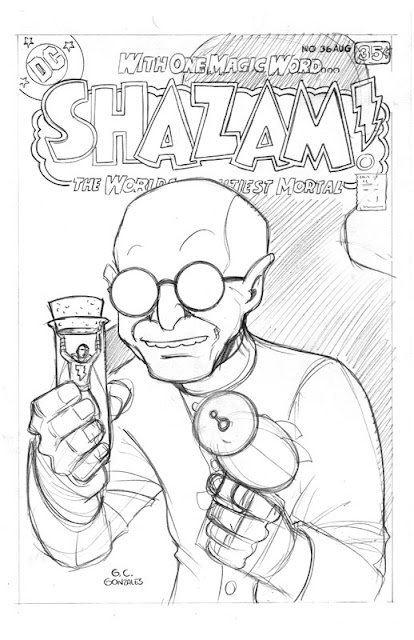 This started off as a sketch of Captain Marvel villain, Doctor Sivana, in my sketchbook. Then I thought I would ink it on bristol board, so I enlarged it and light boxed it to the 11" x 17" board. I decided to add the good Captain and the ray gun. Then noticed that the big shadow that was filling the top right would be a good place for logos. So a bit of scanning and light boxing again and I had the logos penciled in. But what about the issue number? Thanks to a Google search I found that #35 was the last published issue of SHAZAM and that it was bi-monthly. So this is now the pencils for the "lost" issue of SHAZAM #36, (Aug). Inks? Maybe later. Hope you enjoy this!

Posted by Gene Gonzales at 3:05 PM

Very cool. And an interesting way to sign the piece. Any story behind this?

Love the C.C. Beck reference in the signature and I think you would have been perfect to work on this series. Too bad that DC didn't add Shazam to their "retro" books this past month. You would have totally rocked the look of the original!