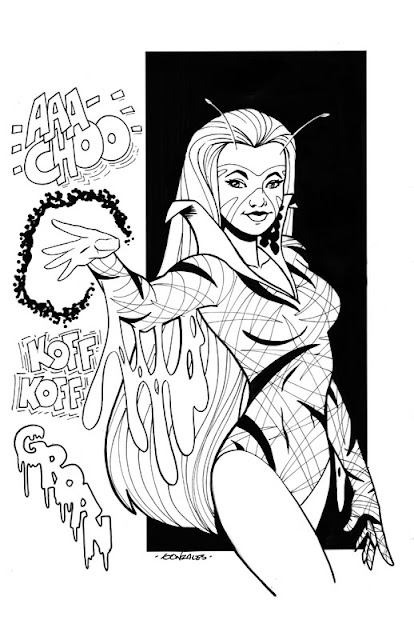 Another Legion reject today. Infectious Lass and the people of her world are super-contagious, carrying millions of different germs. But they are immune to them and they can transmit any disease they carry to others. Yeah, just ponder that one for a moment. :)

After slapping Star Boy with the common cold during the demonstration of her abilities, she pushed it just a bit farther by hitting him with a stomach flu and dropped him to his knees. Unfortunately she hit him with too strong a dose and Star Boy had to go to the infirmary. Personally, I think he was lucky, imagine the variety of diseases at her disposal that she could have given him. Superboy rejected her on the grounds that they can't accept a power that could suddenly put all the Legion on the sick list. That didn't make sense to me as a kid. Any Legionnaire could be dangerous if they went around using their powers on the others. Infectious Lass wouldn't be attacking Legionnaires so why the worry? I think he was just grossed out. I like the name Infectious Lass too. It make me think of infectious laughter or something fun and positive. Probably why she didn't use the code name Disease Damsel. That just doesn't put a nice spin on the power.

Posted by Gene Gonzales at 7:48 PM

Infectious Lass became popular in 2006 when she appeared in the Tales of the Unexpected mini series drawn by Cliff Chiang as a member of a team led by Doctor Thirteen and his daughter Traci. The stories have been collected into trade paperback form called Doctor 13: Architecture & Mortality...

FYI, there's a FB page dedicated to fans of Infectious Lass. I posted a link to your blog so they can show you some love, too-!!! It's well-deserved-!!!