Hey gang, we have traveled back to the 30th century (or 31st Century depending on your preference). Today we have Wildfire. Drake Burroughs was a astro-engineer who received a lethal dose of antimatter energy. But instead of dying his body transformed into anti-energy. He "body" was put into a containment suit and he became a energy release generator. Which was the basis of his original code name: ERG. After his first attempt at joining the Legion didn't pan out, he followed and saved three Legionnaires during their mission. But "died" doing it. 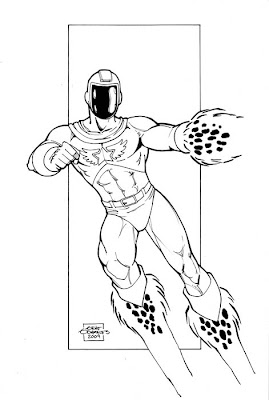 Being made of energy, he didn't die. He just left his containment suit to create the blast to save the Legionnaires. It took a while for him to pull his energy particles back together but when he did he saved the entire Legion from a threat. Not bad for a rookie.
Wildfire's personality was pretty average when he first appeared but he was quickly portrayed as a hot head with a quick temper. Wildfire became my favorite Legionnaire when he appeared the second time. I had missed his original appearance when it came out and it took a long time to track down that comic. His costume was always cool, but I liked Dave Cockrum's original look. The visor actually went under the area that would have been a chin. Later Mike Grell simplified it as a "window" on the front of the helmet. Easier to draw, but not as cool looking to me. :) 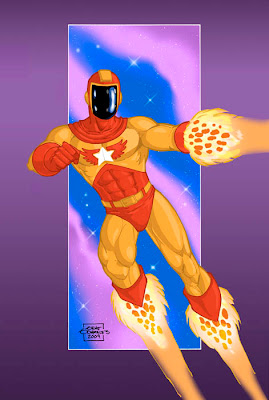 The top image is done in ink on 11" x 17" Strathmore Bristol Board. The bottom image was colored in Photoshop.
This is Post #714
Posted by Gene Gonzales at 5:25 PM

Another great Dave Cockrum design -- I reiterate my previous comment about Cockrum being comics' best costume designer ever -- and yet another great Gene Gonzales rendition!

Excellent rendition of Cockrum's only new Legionnaire, Gene! And I truly envy your Photoshop work!

So what years did Dave Cockrum work on the Legion? If it were not for this blog, I would not have even known he worked on the Legion! Apparently,a high water mark for the title. Not familiar with the character, but definately a great piece!

Echoing the other sentiments. I always liked the original faceplate as well Gene and liked the name change to Wildfire even more. ERG just never did anything for me, but Wildfire...THAT is another story entirely!

"She ran callin'...Wiiiiiiiillllld-FIRE." Ah... Michael Murphy Martin.
(Your daily "Blast form the past!")

To answer Gary's question, Cockrum's first Legion work appeared in early 1972. (The Legion feature was the backup story in Superboy at that time.) His last Legion story was published in mid-1974, at which time Dave left DC and moved to Marvel -- just in time to co-create the "All-New, All-Different" X-Men.

Gary - Swanshadow has helped me out with the answer to your quesiton. Thanks!

Royce - Arrrgggg, thanks for that song in my head now. ;)

Michael - Thanks for taking the time to post all that info! If we all work together we will increase the Legion fan ranks! :)

Superboy #201 - the issue you mention with ERG-1 saving the Legion - was my very first trip to the 30th century. I was hooked immediately, even though I had no idea who all these 'new' super-heroes were. I even wrote about it at Rob Kelly's Hey Kids, Comics blog.

I always loved how Cockrum drew Drake's energy blasts firing out of the cuffs of his gloves and boots.