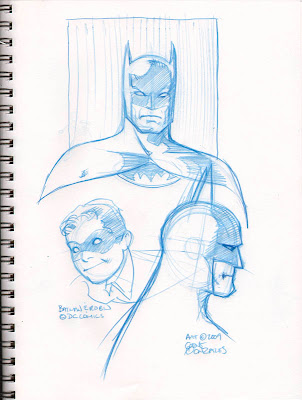 Just some Batman related sketches today. My days have been filled with Batman and Robin lately and I have never been completely happy with my version of Batman. For me Neal Adams and Jim Aparo defined my ideal Batman. Especially Aparo's early run in Detective Comics and The Brave and The Bold. Those 100 Page Spectacular issues of those titles were among my favorites! Batman teamed up with Aquaman in one of those issues and Aquaman was a total badass! The Atom revived a brain dead Batman in another issue of B&B. Over in Detective Comics, Batman is hunted for the murder of Tahlia. In Batman, The Shadow guest stars! (I think Irv Novick did the art on that one). Great time to be a comic reader!
This is Post #766
Posted by Gene Gonzales at 7:53 PM

Aparo and Adams were the definitive Batman artists for me too Gene. (As were Infantino and Rogers!) Ah the memories of youth!!

By the way....your version isn't half bad either! Brian is keeping you on your toes with all the invitations to Gotham City, so you should feel right at home drawing the Bat-Family!!

That's my favorite era of Batman, as well. And to me, Aparo's Bats was the definitive one, even moreso than Adams'...

I saw Neil Adams for the first time at the Baltimore Con a few weeks back. Such a legend!

Happy Thanksgiving to all! I am thankful that Gene shares his talents with us on a daily basis!

You'll get no argument from me about Aparo and Adams, two of my favorites as well.
Thanks for sharing the sketchbook Gene....it reminds me I dont have a Robin piece by you...need to fix that at some point ;)

I agree Chris. But I think Aparo and other artist from that time took their cue from Adams.

Thanks Gary! Happy Thanksgiving to you too!