I feel like today is Christmas Eve! And there is a great big present under the tree. The present isn't for me, it's for all of you and I hope you like it. And I hope it fits! :)

PERILS ON PLANET X (POPX), the webcomic begins tomorrow. Chris and I have been promoting it as much as humanly possible. I hope all of you will carry that torch for us and let others know about it. This has been a labor of love, sweat, and tears. I cannot express how excited we are about releasing it. And it's free! 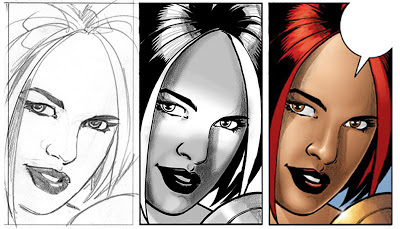 On the eve of the launch I thought I would share another bit of the process. Originally POPX was going to be in black and white. There was no money for color at the time. So I started playing with grays and textures. Above is a panel featuring our Pirate Queen. The first panel is my original rough done in pencil on Bristol Board. After I inked the panel, I erased all my construction lines and then went back and shaded the panel with a 4B pencil. I didn't smooth it out because I wanted the texture to show through for the second part of adding gray tones in Photoshop. By putting a light source right across her eyes, I was going for that old school Hollywood lighting on her to make her more seductive in this panel. Later a search for a colorist introduced us to Ian Sokoliwski and he colored the entire first issue.

I hope you join us tomorrow for some fun and adventure on Planet X.

Fun with a (digital) Pencil 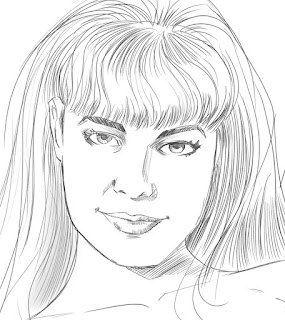 Last weeks post about the cover process for the Perils on Planet X cover got me thinking. The process I used to paint years ago involved doing full pencils drawings. Developing the values with the pencil, blocking in color with an airbrush and then defining with color pencils and paint. So for a warmup today I wanted to try and mimic drawing with a pencil digitally.

I had a photo on one screen and was using it as a reference while I drew on my Cintiq. I had to play with the brush/pencil settings a bit before I got to a line quality I liked. Color of the pencil was another factor. Finding that right shade of graphite was tricky. The other interesting thing was not changing the pencil size to cover big areas. Something I could do digitally but certainly couldn't using a real pencil. Over all I think this worked for a quickie.

Hopefully everyone who visits this blog knows that Christopher Mills and I are releasing the first chapter of PERILS ON PLANET X as a webcomic. If not, you do now. Each Friday beginning February 1st we will release a new page in the exciting adventures of Terran Donovan Hawke on the mysterious planet of Xylos. You can find out more about it here: PerilsOnPlanetX.com.

I thought I would share the roughs and comps that helped developed the first chapter cover. I can't tell you the exact thought process that went through it all because it was several years ago. And frankly I had completely forgotten about the comps I did. But they will still be fun to look at. I hope.

Below is the first rough. I started with pencils and the sketch is only about 4 inches tall, if that. The idea was to introduce our main characters and some elements of the first chapter. I took the movie poster approach here. 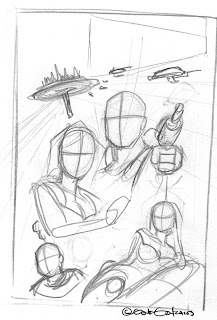 The next step was to do a basic color comp. I didn't get that far really. I just blocked in what I thought would be a nice warm contrast to the logo. We quickly moved from there. 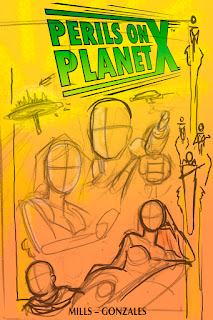 Rough #2 was a bit more dynamic. And at some point we decided to make the image a wraparound cover. It was all the rage back then. Our hero Hawke in an action pose with the other characters around him. I gave our "bad girl" the lions share of the back cover strangely enough. Funny that at the time I had thought of her with long red hair, both in the first rough and this one. The color comp followed. 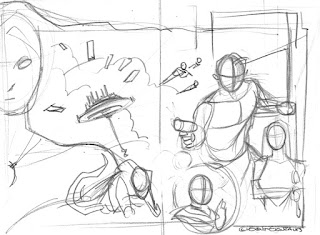 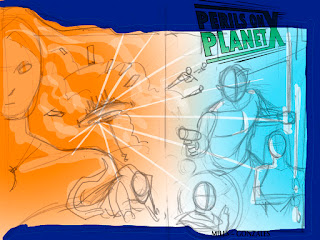 Below we have the beginnings of what would be the final idea. Still a wraparound cover. The publisher at the time had agreed to it. Some elements of the first and second roughs have come back in a slightly different form. While it still retains a movie poster look, it has also taken on the look of sci-fi/fantasy novel cover. Something I know I was shooting for in the end. During all these stages Chris was providing feedback and constructive critiques, making this a true collaborative effort. 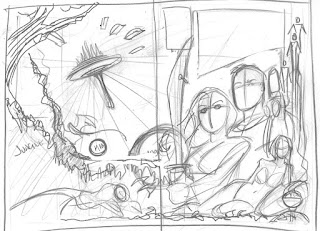 At this point in my career I was using a different painting process. I would do complete finished art in pencil (see below) and seal that with a fix-a-tif spray so it wouldn't smear. I would then block in the color with an airbrush, not using any stencils so as to avoid hard, cut edges. When that was completely dry, I would go back and define everything with paint brush and color pencils. Since moving to Florida I never replaced my air tank for airbrush work and have since moved on to other processes. But I still like this process quite a bit. 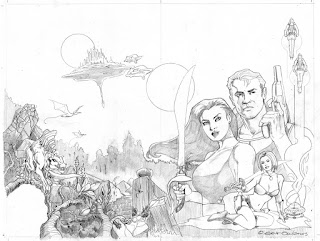 Below is the digital color comp I used for creating the final image. 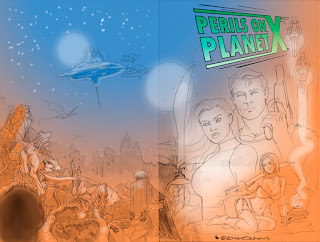 And then the final image. 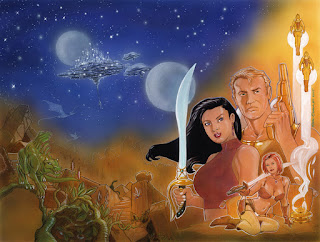 If there is a continued interest in this type of post, I will share some other behind the scenes art and design for the series in the future.

Okay, so I might be a junkie. Or at least a creature of habit. I was going through withdrawals from this blog. That went away. Sometimes I would have a moment of panic in the evening: "I didn't post!". That too has calmed down. I have been busy though and that was the plan. If you want to hear from me and what I am doing on a daily basis make sure you follow me on Twitter. There is a link in the right column. More info after the art...

Below are the remaining CCSs. First up is one for Steven. He requested a young lady in a Cheongsam dress. Thanks Steven! 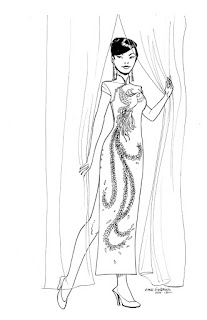 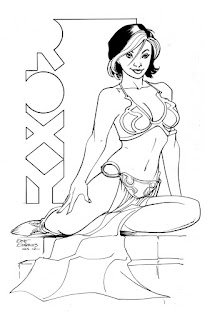 Sean asked for the one next two. Gen 13s, Roxy in a Slave Leia outfit and Rogue in her current uniform. Both fun pieces. Thanks Sean! 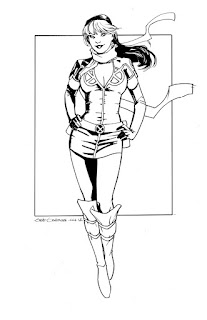 The next one isn't technically a CCS but I finished it with the rest. Gary saw the rough pencil version of this when I posted it. He commissioned me to finish it. Thanks Gary! 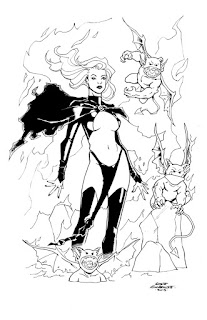 News: PERILS ON PLANET X is a web comic series by writer Chris Mills and myself. We are  are serializing the entire 90+ pages, one page a week, at PERILSONPLANETX.com. It launches February 1st. You can read more about the series there. We have also set up a Facebook page for the series at Facebook.com/PerilsOnPlanetX. We are both very excited to finally be able to share the comic with everyone. It has been years in the making. Really. Years. And you can start reading the first chapter February 1st. I hope you will join us. And I hope you will get the word out to everyone you know. :)

In the week I will be finishing up a couple of commissions and then adding another project to my list of things to do. 2013 is going to be very productive!

You are invited to join Christopher Mills and I
as we jump into the first chapter of... 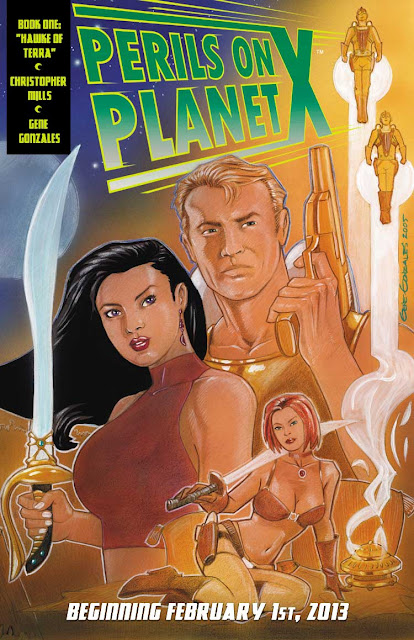 A new page of this adventure on a lost world will be presented every Friday beginning February 1st.

I hope you will join us!

Email ThisBlogThis!Share to TwitterShare to FacebookShare to Pinterest
Labels: Perils On Planet X 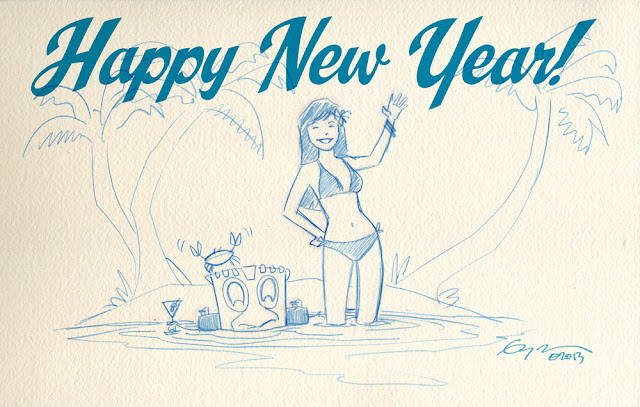 I hope everyone had a safe and fun New Years Eve. So begins a new year....

I have said before that while the daily aspect of this blog is done, I will continue to post. I have had too much fun with everyone here to let that go away. I have a lot of projects in the works for 2013 and I will be sharing the progress here. Along with other artwork. This blog will still feature a variety of work and styles, just not everyday.

Official updates will be done weekly on Thursdays. That doesn't mean I might not toss something here in between, but you can be sure something will be posted every Thursday.

Thank you for, well, everything! Your support means a lot to me and I hope you will continue to come by to see what I am up too.