Sketchbook Thursday & No Pittsburgh for Me 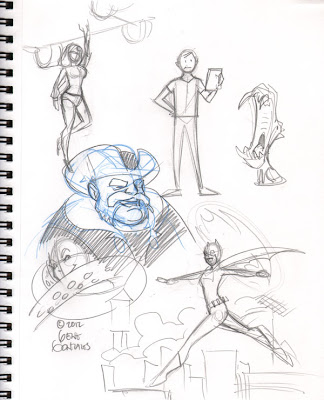 I was going to wait until next week to announce this (because I was hoping I wouldn't have to) but I will not be attending the Pittsburgh ComicCon this year. Not work related...well, not my work. I will need to be around the house during that weekend.

I am going to be posting more than a few Sketchbook days in the coming weeks. I had a back log of commissions that I finally got under control but I still have two rather large commissions and one smaller one. Everyone has been patient, thankfully, but I am the one who hates to keep people waiting. I am also working on a guest comic strip piece that I will talk about when it's done. Which should be in the next week and a half. If you know what I am talking about, please do not mention what it is. Some people (Spazzy) were privy to the conversation (Spazzy) and that's fine, but until I am done (Spazzy) I would rather keep this one under wraps.

Who knows, when those things are done, maybe I will set up a table here at home. And put my banner up behind me and do some Conventionless Convention Sketches. :)

Posted by Gene Gonzales at 7:59 PM

Bwahahahaha!!!! My lips are sealed... For the right price!

And here Royce and I were going to take you to dinner . Who is going to keep an eye on Joe Pekar????

Yeah, that would have been great Gary.

I don't think Joe was planning on going this year. I hadn't even thought to ask him.