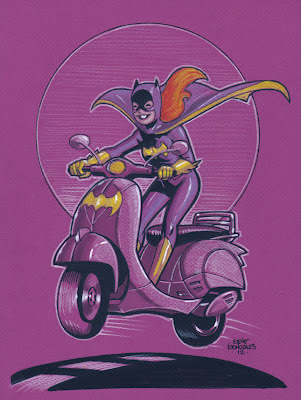 My day was filled with floor plans (commercial work), Vampirella roughs (share tomorrow) and Batgirl. I originally had Supergirl in the rough of the above image, but decided to let Batgirl shine alone. Also, one of the reasons I normally don't do multiple characters as a Canson Cutie, is because I pick out the best color paper to use for a character. This color wouldn't be my first choice for Supergirl. Nor my second or third. But I like it for Batgirl.

Posted by Gene Gonzales at 5:15 PM

I don't usually like to see Kara omitted Gene. But you are right, she wouldn't gel well with this color paper. I like the look of this one. Hope it fetches a lot on ebay for you.