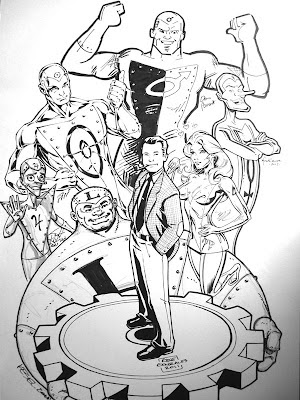 I designed the layout for this piece last year for Bill. A jam piece of the Metal Men. I did Doc, and rough out everyone else and I posted it here. Well Bill sent me this image to show it is complete. Came out pretty cool I think. Here is the list of artists and what they contributed:

Thanks for sharing this with us Bill!

In other news, apparently I have been over doing it. I normally get sick once a year, maybe twice. But I have had a string of colds since January. Last night after a business function, I was finding it hard to take a decent breath without cough up a lung. Went to the doc this afternoon and was told I have a very severe case of bronchitis that is so bad that I am bed ridden for the next four days. As he said it "or you will be in the hospital by Friday. He said no sitting at my desk, no computer, just bed. Yeesh, such drama. :) While I was trying to get some commissions done, some contracted work and more 1968 themed pieces done this week, I think I will heed his warning. I will be posting but it will be pretty light stuff. Feel free to just come back next week. Won't be much to see, move along.  :)

Posted by Gene Gonzales at 4:09 PM

Email ThisBlogThis!Share to TwitterShare to FacebookShare to Pinterest
Labels: commission

I am not usually a fan of jam pieces, but I think that your layout really kept this one on track and it came out pretty cool.

Hope you get better soon Gene!

This piece came out great and get better soon Gene.

Thanks Michael. You knocked Tina out of the park!

Thanks Gary! Didn't you get laid up with pneumonia? I seem to recall that.