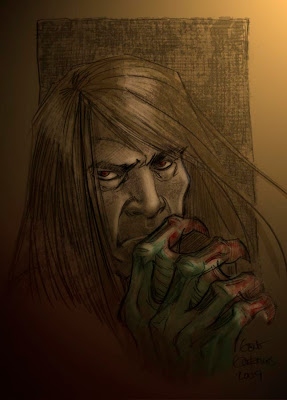 Today I present my take on Claw, a DC sword and sorcery series from the 70s. They have brought him back on a few occasions including a team-up with Red Sonja. I think I read the first few issues of the series when it came out. I remember the basics about his demon hand, but that's about it. I found it very funny to see the demon he switch hands with. Imagine a very vile, big, nasty critter with a small human hand on one wrist and maybe you might chuckle too. This was done in pencil in my sketchbook and then a whole lot of Photoshop thrown at it.
Today I was inking a page from Perils On Planet X. I plan to do the same tomorrow so we will be having mostly sketches for the next day or two. But, I will have a commission starting by the end of the week and I will see if I can get permission to share as I create.
Tidbit of art illustration history...Commissioner Gordon was brought up in the comments the other day. (Actually Royce brought up Chief O'Hara but that's just picking nits) The actor that played Gordon on the Batman TV series in the 1960s was Neil Hamilton. Little known fact that Hamilton was a model for J.C. Leyendecker. If you don't know who Leyendecker is, just do a quick Google on the name and I will be surprised if you have never seen his work. Hamilton posed for this image, Thanksgiving 1918. Leyendecker gave him the painting later and in the recent book about Leyendecker by Laurence S. Cutler and Judy Goffman Cutler, there is a cool photo from the 1920s of Hamilton looking at the original hanging over his mantle. Just thought I would share. :)
Posted by Gene Gonzales at 6:40 PM

Not that familiar with Claw but the piece looks great and the book sounds interesting.
More Commissioner info:
Actor Pat Hingle, who played Commissioner Jim Gordon in the Batman movies from 1989 through 1997, died on Saturday. He was 84 years old.

I'll be darned--that IS Neil Hamilton! I've seen this painting at least five or six times, and I've never would have put two and two together...

Wow, I didn't know Hamilton was the model for that painting!

Wonder who posed for the soldier?
Ba dump dah!

Thanks Brian. I didn't hear about Pat Hingle. That's a shame.

Hey Lud, I didn't know about it until I read the book I mentioned. Pretty interesting.

That was Royce Thrower, ladies and gentlemen. He will be here all week. :)

Thanks for the tidbit about Hamilton. To add interest, and as Brian stated, Pat Hingle just died. Feels like a Commissioner Gordon Twilight Zone episode!

Love the Claw art, has a very Lisner vibe to it, especially in the face and with the color of the eyes.

Hey Gary, very cool, I have never had a comparison to Lisner. But I can see it now that you mention it. That's funny. Thanks!