I had a fun day at the Mini-MegaCon in Orlando. I got to chat with people I only see at cons so it was nice catching up. Talked with Craig Zablo & John Beatty a bit. Desperado's Joe Pruett and I caught up on some work we are doing together. Also caught up with Mike Perkins, Casey Jones and Jeff Parker. I hadn't seen Parker in years so that was nice. He gave me the secret to his success, and for that I am grateful. :) And I did some sketches. Here are two of them:
First up for Lan Pitts is a sexy librarian. (Yes Royce, she's a redhead if you like) Lan requested this and mentioned Gil Elvgren for inspiration and I was off. 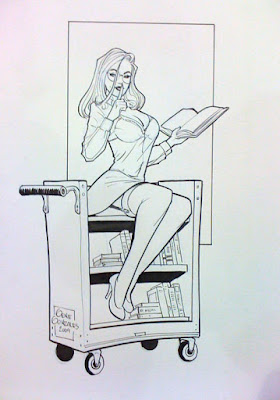 Next up, my oddest request: The 1960s Batman tv show version of the Batmobile. Yup, the Batmobile. I thought it came out pretty good, and so did Keith, who commissioned it. 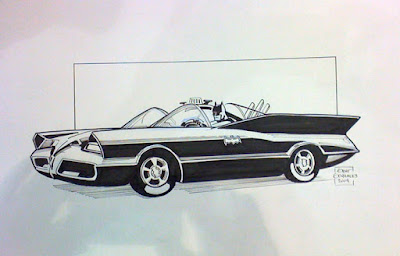 Like I said, the show was fun. The only mishap was getting convention food in the shape of chicken tenders. I bit into it and thought it tasted funny. Not "ha-ha" funny. That's when I noticed the darn thing was not cooked. Only the batter got cooked. They were very nice at the concession stand, giving me back my money and offered me anything else I wanted. Even if it was from another stand or cart. I thanked them but declined. I had lost my appetite.
Back to the show tomorrow!
Posted by Gene Gonzales at 8:28 PM

Amanda freakin' LOVED it. Thanks for nailing this, man.

Anything inspired by Gil Elvgren is a good idea.

Also, love that Batmobile! Now I'm going to have that theme song stuck in my head for the rest of the evening, though.

Glad to hear it, Lan. Thanks again!

You are so right about Elvgren, Michael. Sorry about the song in your head. Right there with you buddy. :) Thanks!

Sorry to hear about the chicken tenders Gene! Con food is typically not 4 star :-).

Great job on the librian and the pose on the book cart! And you don't see a Batmobile commission often, but it is certainly neat! Hey, do a see Wonder Woman's Invisible Plane up their in the sky?

Enjoy the rest of the con!

You nailed both sketches Gene! That librarian sketch totaly ROCKS!

(Whispering) That librarian totally rocks, Gene. Redhead or not.

The tenders were probably still frozen in the center when they went into the vat. Not the most pleasant experience, but glad it didn't dampen your creativity! Were these done at the convention or started beforehand? The reason I ask is that those are more like commissions than "con sketches."

Congrats to both recipients. Can't wait to see what falls off your drawing board tomorrow!

Gary - Yeah, con food is a serious risk. I love the idea of Wonder Woman's invisible plane. Ha! A blank piece of paper! Thanks!

Royce - Thanks Royce. Regarding chicken tenders, whatever happened, I'm off those for a while. Both pieces posted fall into the Con Sketch category. Both were started and finished there. As well as a full page of Ka-Zar, Zabu and the Savage Land that I did for Karen but forgot to take a picture of. D'oH! She is bringing it today so I can snap a picture. I had planned to start my sketches ahead of time but all but one were in sketchbooks, so there was no jump on the list by doing one at home. The Batmobile was requested there with reference. Whew!

It was great seeing you at the show. The Librarian is so sexy... how come they never look like THAT! The guy who got the Batmobile was at Beatty's table at the end of the day. I saw him with the art and we talked. He totally loved it. We all did.

It was great seeing you at the show. The Librarian is so sexy... how come they never look like THAT! The guy who got the Batmobile was at Beatty's table at the end of the day. I saw him with the art and we talked. He totally loved it. We all did.

Great Batmobile piece and that librian is amazing... :)

As a genuine, real Librarian, OMG, I like a whole lot!