This new Canson Cutie was done for Bill. Bill wanted something along the same lines of some other Catwoman pieces I have done, in that she is in the middle of a crime. Adding the safe, the cat, the mirror and Batman was me having fun. This was done in mixed media on 11" x 17" Canson Mi-Teintes Paper. Thanks again Bill! 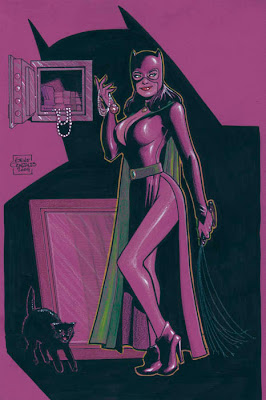 And this one is from the flat files. Since buying a scanner that can handle tabloid size paper, I have been scanning old artwork that was never properly scanned. This one is from 1994.
Back when I was doing the art for DOMINIQUE for Caliber Comics I did this piece hoping we might use it for a cover. It was never published. Seems the piece didn't impress enough to be used, but I always liked it. This was one of my earliest attempts at painting with acrylics and as such it's a bit heavy handed. 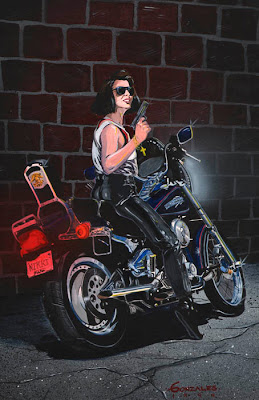 Deena worked with someone who owned a Harley and we went over to have her pose on it. I took a ton of shots that day, and this was before digital cameras so you can imagine what that cost to develop. Or maybe not, if you are not that old. :) Then finding the right shot I started on the painting. Some adjustments had to be done in order to make Deena into Dominique, but not too much. I used Deena as my model for Dominique for the interior pages too. So this is just a semi-blast from the past that I just thought I would share.
Posted by Gene Gonzales at 8:56 PM

Seems as though you're getting a lot of calls for Catwoman these days, Gene...! ;)

Yeah, Brian will be jealous! Nice pick-up Bill! The Harley pic is nice Gene. I think it should STILL be used somewhere, well other than this blog. Maybe for your local bike shop's ad department?

Did not know that Deena served as a model for you way back when. Where/how did the two of you meet?

I love the sillouette (bad spelling) of the Batman overshadowing Catwoman. The purple Canson paper seems to be made for Catwoman! Let's just call it the Catwoman Canson Paper!

Yeah Michael, what's up with that? :)

Royce - I think it's usefulness is past it's time really. Though it's fun to look at and realize it was 15 years ago. Deena and I had been married almost two years and it would still be another year or so until Dakota would be born. :)

Gary - Oh gosh, Deena has been my model and muse for a long time. As to how we met, if you are interested I will tell you in Pittsburgh. Too long to go into here. :) Glad you like the Catwoman Gary, thanks!

Purple is her color and you always do her justice.

Love the blast from the past, but the real treat today is your Catwoman piece. Cover material for sure!