Have a swingin' Christmas! (In October???) 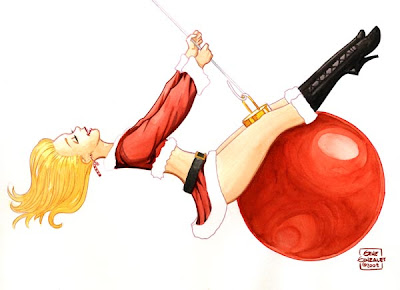 I know it's only October, but I have started on Christmas images for CILM and another outlet. I can't say anything until next week because I am still setting things up and doing a quality check but if all goes well, you will be able to order prints of a lot of my work. Island Girls anyone??? This piece was done in watercolor and some color pencil on 10" x 15" Canson Cold Press 140lb Watercolor paper. I am going to add a digital background for the final piece. Tomorrow I will show the before and after on another piece I am working on. Also the Christmas images could be available for Christmas cards if all goes well. More later.
Christmas came early because some of the Conventionless Convention Sketches are not going to be posted. The requests were a little too risque for posting without an adults-only tag and I don't want to do that. I still have a nice Valerie from Josie and the Pussycats coming up that I will post when finished. :)
I've also started on a 12" x 48" painting on canvas. Island Girl/Tiki themed. I think I posted the roughs a few months ago here on the blog. I will photograph the progress on that and share when I get farther along. Also going to be starting on a 16" x 20" Space Ghost and crew painted commission. That will be fun! 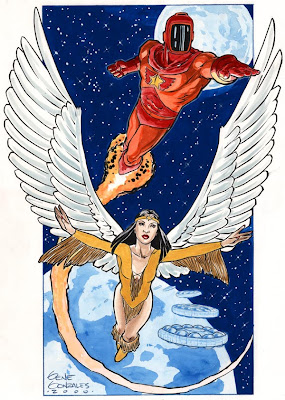 Today's Legion couple is Wildfire (Drake Burroughs) and Dawnstar. The background reflects the story that Dawnstar first appeared in and features the Resource Raiders space ships. Wildfire was extremely popular as soon as he first appeared. If they did things back then like they do now, he would have guest stared in every comic DC publishes and had at least two series of his own. He would have been DC's Wolverine. Dawny was introduced as the Legion's first Native American but she was from another planet. See, all the Native Americans left Earth at some point and colonized Starhaven. And because she was of Native American decent, she was a tracker. :) Both characters are favorites of mine. This piece was done in ink, watercolor, and gouache on 11" x 17" illustration board.
Posted by Gene Gonzales at 5:32 PM

Will you be posting the ones you can't post here in your Comic Art Fans gallery? I'd love to see them, but understand your desire to keep this a PG/PG-13 blog. CAF has the ability to easily tag things as "adult," and since you already have a gallery there it's a possibility. If not, that's cool, but I just thought I'd mention it as a possibility.

Also, that Christmas in October watercolor is sweet! If you do end up producing Christmas cards, I'll most likely be forced to pick some up! I have quite a few friends who would love to be on the receiving end of one of those cards! Of course, my wife might veto sending them to SOME family members :)

This Christmas gal is awesome! If you make prints put me down for one :)
I understand about the more risque commission requests and keeping the blog PG-13. I think Brandon brings up a good point the CAF gallery might be a good place to lets us get a peek. I have seen some very adult art in some galleries. If not can we beg for an e-mailed image? Pretty please?
Lastly the Legion art has been great. Did you see in the curent Brave and Bold issue 5 ol' Bats had a run in with the Legion :) Fun Stuff!!

I may be on the other side of the fence on this one. I liked Wildfire, just not as much as many others did. I never really got into the character but certainly didn't dislike him. Similary sentiments with Dawnstar. I did like Grell's art on the two characters though.

I love a great piece of cheesecake with my Christmas dinner, so I am excited about the Christmas series that is coming.
I would like to echo the request that you coound either email or post to CAF assuming that the pics are sharable. We certainly understand the reluctance to post these on your blog. The Christmas cards seem like a great idea! Can't wait to see your art get its due!

Sorry for all the typos lately. I have a broken left index finger compliments of Budd Root with an assist from my brittle aging bones.

Brandon - Posting them in CAF is a good idea. I will try to make some time this weekend to do that. Thanks!

Brian - Welcome back! I will know more about the prints and cards next week. I am having samples done. I missed the B&B issue with the Legion. I will have to check it out. Thanks!

Royce - I think Wildfires hot headed personality was one of the reasons for his popularity. Really, there wasn't a character trait like that in the Legion back then. I think he shined during the Earth War saga. Sorry to hear about your index finger. Because of Budd? This is a story I have to hear. Thanks!

And thanks everyone for your interests in prints and cards. I will let you if its a go as soon as I get my samples.

Royce...I hope your finger is ok too and the story involves bikini clad women, dinosaurs and lots of Budd art! :)

Gene, the Island Girl prints are a great idea. I got exposed to your work through the purchase of some prints that you had at a convention, so there is still room for the "paper" media!

Can't wait to see the rest of the Christmas set!