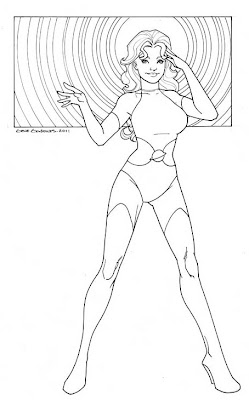 Saturn Girl © DC Comics
We have Saturn Girl making another appearance on my Pittsburgh ComicCon Advance Sketch List. This one is for Anthony and this time Saturn Girl is in her pink "bikini" outfit from the 1970s. I will not presume to say who designed this costume. Learned my lesson. :) Thanks again Anthony. I hope she is a welcome addition to your collection.
This was done in ink on an 11" x 17" sheet of bristol board.
Now for the update...
Finished:
Riddler (Female version) Canson Cutie
On Deck (in various stages of completion):
Dani Moonstar as a valkyrie - Canson Cutie
Psylocke (British version) - Canson Cutie
Enchantress - Canson Cutie
There are two more Canson Cuties after that and one more painting. Still time to get on the list.
And the beat goes on. Have a good weekend everyone!
This is Post #1280
Posted by Gene Gonzales at 3:23 PM

loving both saturn girls, gene! the backgrounds behind their heads have been great touches :)

(Adding this post just so I get notifications of your reply :) )

Thanks Charlie! I see your Black Cat made it to you today. Hope you enjoy. :)

Thanks Chris! I don't have a Facebook fan page (I would feel odd setting that up.) ;) And my FB account is really just fed by my Twitter account. Signing up here is a good way to see what's up with my work, 7 days a week. Thanks for dropping by!

I love your Legion sketches. This is a great one.