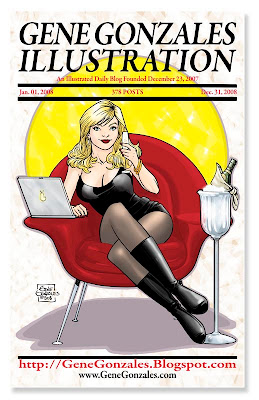 Here she is, raising a glass of champagne in order to say goodbye to 2008. And to say "Happy Birthday Royce!" Sorry she isn't a redhead. :)
This image was created a little differently than normal. After the sketch was done, I scanned it into Photoshop and used it to create the "cover". I set the type around her in black, then removed the sketch and printed out the "cover" on an 11" x 17" Strathmore 400 series 3-ply Bristol Board. All the text was printed in black. Then taking that board, I used my light table to draw and ink the illustration. So the final art is black and white with all the copy in place. I then scanned in the line art and erased everything that wasn't the illustration so that the art was in the same file as the editable text. I changed the color of some of the text, following the red and black scheme of most Saturday Evening Posts, and colored the art. I did the background with varying brush strokes in order to get a similar effect that J.C. Leyendecker would do on his covers. I like the texture of the background to contrast the slickness of the foreground.
So that's it, the final image of 2008 for this blog. 378 posts. When I set out with this goal of posting art everyday, I wasn't sure I would be able to do it. But I wanted to set the bar high for myself. It was as early as the first month that I realized this wasn't so hard. I create everyday, I just have to take the time to share it. The tricky thing was I actually create more than I can use, and sometimes what I work on can't be shared until a later date. So while the art wasn't always created that particular day, it was still new art to share.
I spent this morning looking back at each and every post and the comments (more on that later), and I am amazed at how much work I have done this year. And there are a lot of pieces that were never finished too. That was surprising. It seems the year flew by, I would see some art from 10 months ago and it seems like it was only a few weeks ago that I did it. The Conventionless Convention Sketches were a big hit and provided a lot of material for the blog. Some of the work I do isn't terribly exciting so it was nice to have the sketches to keep some interest in the blog going.
The main reason I looked back at all the posts was to look at the comments. Or rather who commented. It's been said a few times that I have been really committed to this blog and how much it is appreciated. But the real commitment has been from you. The blog gets thousands and thousands of hits a month but there has been a very dedicated group of people that post comments. Some drop in from time to time, while others have been here almost as much as I have. Not counting multiple posts on a single day, Royce has posted 302 days, Gary comes in at 289, Brian at 95 and Craig chimed in 69 days. These numbers are amazing! You guys have really made this blog. It seems like you are always here, day in and day out. I believe that without you four there would probably be less people posting. I think that having such a great core group of conversation has made others jump in. I enjoy when the conversations take off without me. A big "thank you" to everyone.
We have had surprise posts from people like Andy Ihnatko, of the Chicago Sun Times, one of my favorite tech writers and if you ever hear him on a podcast, he is also a very funny guy. Most recently Microsoft CEO Steve Ballmer posted a comment. While Andy is a comic book fan, I have no idea how Steve Ballmer found his way here.
So the blog is a success in my book. Not for the continuous posts, but for the people I have gotten to know better and the ones I have met here. I wish everyone a safe and Happy New Years Eve and a happy, healthy, and prosperous 2010.
Oh, and I'll be here tomorrow with new art. :)
Posted by Gene Gonzales at 9:37 AM

Happy New Year to you and yours and the fine folks who frequent this blog! Congrats on the posting(s) and this one is a fine way to cap off the year and all I can say is REPEAT...REPEAT! Cheers!

"Great Job" I have really enjoyed checking the blog everyday. Keep up the good work.

Happy New Year's Eve Gene and everyone here! I don't comment regularly, but I love seeing your new art every day.

And just a quick update on my Conventionless Convention Sketch...when my wife caught sight of it, she wouldn't let me hang it in my home office...she loved it so much, she made me hang it in the living room!

Hey Brandon, I know you are out there and that's what counts. :) I'm glad your wife felt that way. I often here it go the other way around. Very cool of your wife. Happy New Year!

Congratulations Gene and thanks for all of your efforts on the blog! Please continue the fun in 2009!

Thanks Gary. And thank you for all the feedback. If I was doing this alone, I don't think I would have succeeded. And we start a brand new year of posts tomorrow. :)

This pic turned out GREAT Gene!! Don't worry about the redhead...blondes are in my top three too! lol

Besides, this one has that Supergirl dressed for New Year's Eve kinda vibe going for it!
Congratulations on an amazing milestone! The year has been a blast for us to sit back and watch the parade of artistic gems!

Congrats, and Happy New Year!
Talk about a machine...you make me feel like a lazy slob...I need to work as hard as you.
Love this image...very nice.

Thanks Royce. I hope your birthday was a happy one!

Actually Will I think you work harder. Full time+ job and you have written scripts for the next three years of Diary of Night!!! I'm the lazy one. :)

Congrats on the truly daily art blog! You should be very proud of yourself, and I look forward to your 2009 creations on a daily basis as well.