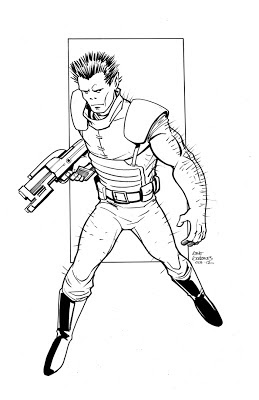 Porcupine Pete was a Legion reject from the Dave Cockrum run of Superboy and the Legion of Super-Heroes. I have posted a piece I did of him before on this blog, but that was in his original costume. Years after his first appearance, Pete joined the Legion of Substitute Heroes. And even later he was included in the Legion's "Five Years Later" storyline. His appearance was more of a freedom fighter and he wore a commando type outfit. My depiction is a bit different because while he carries a weapon, the guy himself is a weapon by shooting the quills from his body. So I changed his shirt because bearing his arms makes shooting his quills easier. I also thought that those quills would be poking through is clothes in various places too. Thanks for Michael for the commission!

Posted by Gene Gonzales at 7:46 AM

He looks so angry!