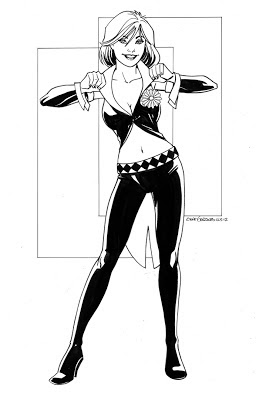 I remember the original version of this character. She was originally branded as the Joker's Daughter but we learned later that she was actually the daughter of Harvey Dent, aka, Two-Face. I'm not sure what her story is now but it was fun to revisit the character thanks to Vincent's request.

Tomorrow I will be posting the Conventionless Convention Sketches that were commissioned as Christmas gifts.

Posted by Gene Gonzales at 4:14 PM

Duela actually IS the Joker's Daughter. And Two-Face's. And Riddler's.

They finally said that she's from Earth-3, the Earth home to the Crime Society. You know, Ultraman, Owlman, and Superwoman?

Duela's birth parents are the Jokester (Jack Napier) and Three-Face (Evelyn Dent), and her stepfather is the Riddler. She used to date Talon, her Earth's version of Robin.

Over the years they said Duela was schizophrenic and unstable, which is why she kept switching sides, though she once said "I never belong anywhere". Somehow, she kept shifting from her Earth to the regular DC world, which didn't exactly help her addled mind.