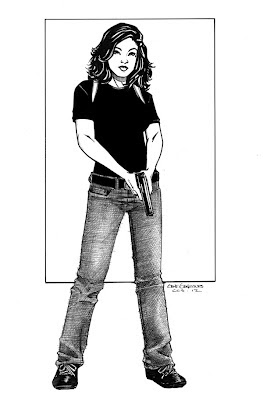 I have had more than a few requests for Terry Moore's Katchoo and Francine from STRANGERS IN PARADISE. I have even inked a Terry Moore convention sketch of Francine, but this is the first time I have drawn a character from Terry Moore's ECHO series. And so I present FBI agent Ivy Raven. This one is for Matt. Thanks Matt!

We are down to the last three. Hellcat, Dr. Nightshade and one to be announced soon. (In other words, we haven't nailed that choice down) :)

Posted by Gene Gonzales at 8:00 PM

Love the detail on this one! Great work on the jeans Gene!

I agree with Royce, the effect on the jeans is fantastic. Terry Moore would be happy to see you do justice to his character!

You did her proud!