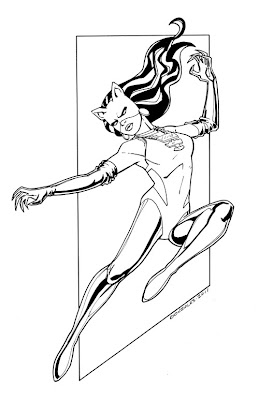 This is the first of two request from Vincent. He asked for Vixen in her original outfit as drawn by co-creator Bob Oksner. Gerry Conway was the writer/co-creator. I remember seeing the house ads in the comics announcing Vixen in her own book, but it never came out. Comic news was hard to come by back then and it wasn't until years later that I learned that the series was cut as part of the DC Implosion of 1978. Thanks Vincent!

This is the 18th of 20 Conventionless Convention Sketches. BUT, we are going into extra innings. Since I announced I would continue doing these until the requests stop, several more requests have come in. If anyone would like to get on the list or wouldn't mind spreading the word, now would be the time. Because my workload is so light right now, when I run out of requests here I will open up a list on eBay.

Posted by Gene Gonzales at 6:46 PM