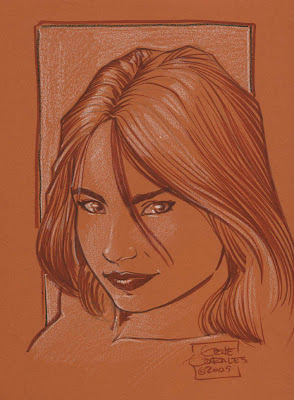 One would think that I would post some kind of bunny image today but no. Instead I was playing with some China Markers I picked up the other day. I haven't been doing anything on Canson paper for a week or so and wanted to try out the white and black markers I bought at the art store on Friday. I will be doing a Josie (of the Pussycats fame) on Canson Paper next, so I thought a warm up would be in order. If you are not familiar with China Markers, they are more like crayons then markers. More waxy than color pencils. I used the white one for high lights on the piece above. Though I could have been a bit more bold with it I'm pretty happy with it.
This piece was done using a orange/red Faber-Castell brush pen on a 9" x 12" sheet of Canson Paper.
Posted by Gene Gonzales at 5:51 PM

Wonder who that Josie is for?

Thanks for the information on the China Markers. Indeed, I think you professional artists have a lot of tools (toys?) to play with! Guess the combination on knowing which tool to use and how to use for a piece is part of your genius!

Was this face based on a person/photo reference? She looks like a real person!

Thanks for the post and hope you had a great Easter!

She was drawn from a reference someone provided for a commission a while back. I just used the face for this piece. The tools can be overwhelming at times. I really enjoy experimenting and that can sometimes be frustrating. But it does keep it all fresh. Thanks for dropping in on Easter. I hope it was a good day for you!

I sometimes like to see a more detailed face in lieu of a complete figure. This is one of those times. Nice Gene.

Gene, where do you find the China markers? Casey suggested them for life drawings, but never quite found them readily available. I did get in some Lyra water soluble crayon sticks for a darker black (darker than graphite) and some nupastels (also in black).

Hey Pat, I just picked the China Markers up at a locally owned art store in St. Pete. I would be surprised if your local Pearl Paint or Binders (are they still around?) doesn't have them. Office supply/teacher supply stores used to carry them as well. Good hunting!

Gene, thanks for the pointers. My nearby Binders closed up a few years ago, and the nearest Binders is over 25 miles from me now. Sadly, my local art store is a Joann's, with Dick Blick about 15 miles away. Office supply stores are also drying up around me, but I'll give Staples a shot.