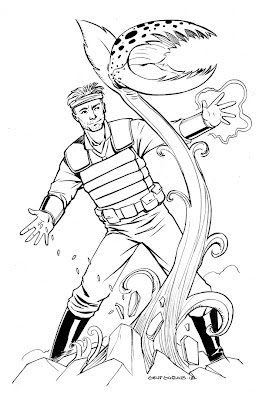 We are winding down to the last two Legion related requests from Michael. This one is Chlorophyll Kid, a founding member of the Legion of Substitute Heroes. In early appearances he carried seeds with him that he would grow extremely fast with his power, but in later years he seemed to have the ability to control plant life, not just the seeds he sowed. His attire fits the time period of the Legions Five Years Later series. The Subs were mostly a resistance force against the Dominators occupational force. Thanks again Michael!

Posted by Gene Gonzales at 7:00 AM