These are the last two Legionnaires for Michael. It was fun to explore the 5 Years Later Legionnaires. Thanks again Michael! 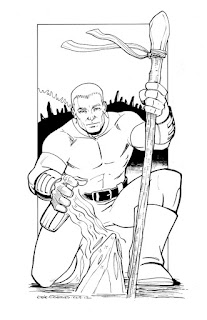 Element Lad - There is a moment that we discover that Element Lad went back to his home planet after the Legion disbanded. He spent years there creating crystal monuments for all of the dead. Everyone on his planet had the ability to change elements from one to another. With the exception of Element Lad, the planet's population was killed for refusing to do the bidding of Roxxas, a space pirate of sorts. The idea that Element Lad spent years alone doing this was touching. It stayed with me. 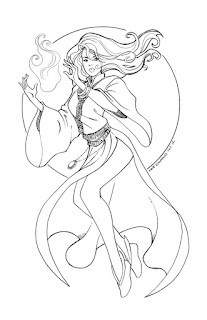 The White Witch has gone through so many changes in appearance since she first appeared in Adventure Comics in the 1960s. Finding reference for her look during the 5 Years Later storyline proved the toughest of the batch. I ended up mixing what series artist Stuart Immonen did with what Esteban Maroto did for the Witch's Who's Who in the Legion entry. I think it works. :)

Both are ink on 11" x 17" Strathmore Bristol Board

Posted by Gene Gonzales at 4:19 PM