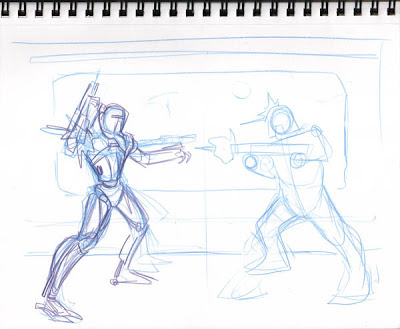 A full day (and a few hours each day before) putting together a rough draft art proposal for a very large potential gig makes for a Sketchbook day today.

I don't know how you all do it, but there seems to be some kind of cosmic powers in play. When work is slow, I offer a Conventionless Convention Sketch deal. Almost immediately after that, the commercial work pours in. But no fear, the initial roughs will be done by this weekend and if the project is green lit, it won't start until after the CCSs are winding down. But it's great how this happens almost every time.

Back tomorrow with Conventionless Convention Sketches. Maybe even two of them to get back on track. :)

Posted by Gene Gonzales at 9:43 PM

That is very kind of you to say Royce. Thanks!