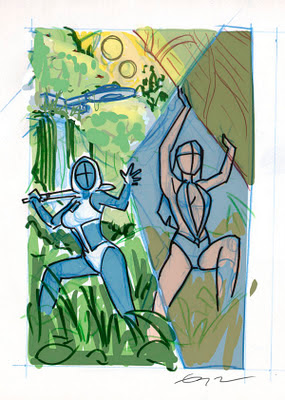 This is a commission I am doing for Tom. Tom is another big time Legion fan, particularly the Cockum/Grell run. You can see his collection of Legion original art on Comic Art Fans. The idea behind this piece was to take a couple of Legionnaires and put them in a jungle setting. But instead of just doing a pose in jungle outfits, we came up with an illustration that could be part of a story. Shady and Night Girl have crash landed a Legion cruiser on a world with two suns. Shady can use her powers of creating intense shadows under such harsh sunlight for a little bit at a time. But that time is well spent, blocking out the sun for Night Girl to use her power of super strength to help clear a path to possible help. In case you didn't know, Night Girl only has use of her power in darkness. And yes, their Legion flight rings are not working. I knew that would come up. :) The final art will be painted.

Below are a couple of other layouts. In the first one the main difference is the cruiser position. And the second one explores doing the piece in landscape.

These were done in marker and Photoshop.

Posted by Gene Gonzales at 7:00 PM

Email ThisBlogThis!Share to TwitterShare to FacebookShare to Pinterest
Labels: commission, work in progress

Sounds like you have a whole story that can be illustrated and submitted:-)

Gary is on to something. How many commissions would it take to tell the story?