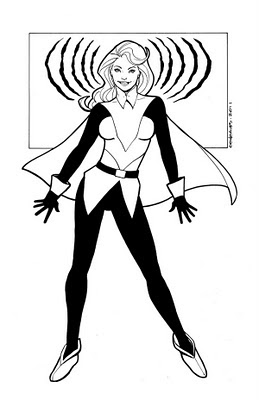 I had completely forgotten about Mentalla until Michael requested her. After tying out and being rejected by the Legion of Super-Heroes, Mentalla joined the Legion Academy to hone her skills as a telepath. During that time she got the idea of joining the villainous Fatal Five in order to capture them and show how valuable she would be to the Legion. Unfortunately the Emerald Empress learned her intentions things did not go well for Mentalla. Thanks Michael for another commission and a trip down Legion lane.

Posted by Gene Gonzales at 6:20 PM

Mentalla's short career was during the Levitz era when all three charter members-- Cosmic Boy, Saturn Girl, and Lightning Lad-- decided it was time to step down and leave the Legion. This meant that a membership drive would happen, and Mentalla thought she was a sure bet to replace Saturn Girl, as the team was definitely looking for a replacement telepath for the team. But Tellus, who had telekinesis as well as telepathy, easily beat Mentalla as Saturn Girl's replacement. Other replacement members included Cosmic Boy's brother, Pol (aka Magnetic Kid); Quislet, an other dimensional being who could only exist in this dimension in a tiny spacecraft; and Sensor Girl, a masked heroine who appeared to have powers similar to deceased Legion member Supergirl (who had died in Crisis of Infinite Worlds, months earlier). Saturn Girl had vouched for her inclusion to the Legion, but it would be months later, when Mentalla was killed by the Emerald Empress, before Sensor Girl's true identity would be exposed by the Empress: former Legion member Projectra.