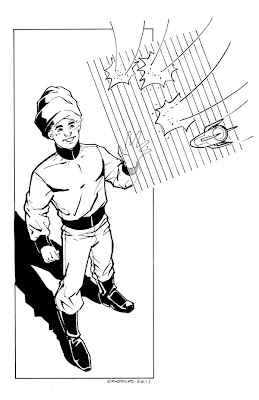 "The Sacrifice of Kid Psycho!" (Superboy #125, 1965) is the story that introduced this would-be Legionnaire. His turban hide his extra-large brain. This brain is able to create and project force fields. After his world was destroyed, Kid Psycho made is way to Earth to join the Legion. When he was rejected, Kid Psycho went back in time to the 20th century to show Superboy what he could do. Superboy was convinced that Kid Psycho would be a great Legionnaire and pleaded his case to the Legion. It was then that Superboy and Kid Psycho himself found out what the medical exams the Legion ordered revealed...every time Kid Psycho uses his power, he shortens his life span by about a year. With this new knowledge, a heartbroken Kid Psycho understood why he was rejected but said he would be there for the Legion if they ever needed him, regardless of what it does to him. Impressed with his willing sacrifice, the Legion made Kid Psycho a Legion Reservist and their Secret Weapon No. 1.

Thanks to Michael for this commission!

Posted by Gene Gonzales at 4:44 PM