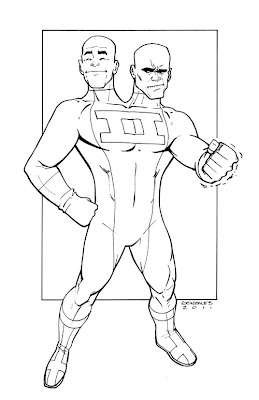 Some more love for the Legion today thanks to Travis. Here we have Double-Header! These two will eventually split into two identical beings, but it's a slow process. And that is really the only thing they brought to the table when they tried out for the Legion. The lack of a real power and their constant bickering lead to their rejection. From there they joined the Legion of Substitute Heroes. I think the real ability they have is their staying power. They were introduced in Adventure Comics 323 (1964) as a throw away Legion applicant and forty seven years later they are still around. And they still don't get along. Thanks Travis!

Later today I will be posting info about Joe Pekar and my new blog.

Posted by Gene Gonzales at 3:46 PM