Get Us Out From Under, Wonder Woman! 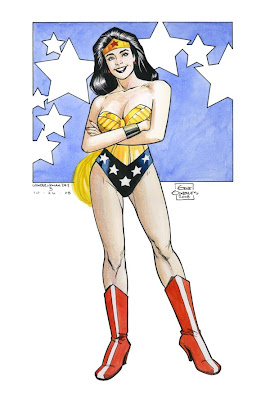 Above is the finished Wonder Woman pin-up I am donating to Wonder Woman Day 3. This was finished in watercolor. Gotta pack it up and ship it out tomorrow! 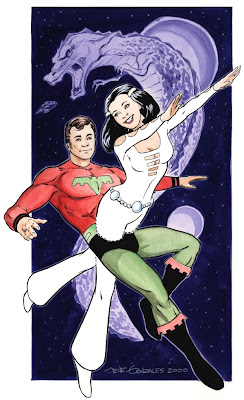 And here we have the next Legion Couples painting from 2000 featuring Ultra-Boy (Jo-Nah) and Phantom Girl(Tinya Wazzo). Of all the Legion couples, these two seemed to have a "real" relationship. I can't figure out why. I guess because the two of them would love and fight with each other but when the chips were down, they would always be there for the other. Even if it meant going against the rest of the Legion. They just seemed "real". For each of the pieces I did a monochromatic background depicting Legion related history. This piece features a scene from Ultra-Boy's origin. Jo-Nah (Jonah) and his space ship was swallowed by space creature (whale). But he was saved when a Science Police cruiser blasted the creature open. Somehow Jo gained his ultra powers from the creature. I kid you not. :)
Posted by Gene Gonzales at 5:00 PM

Both of great pieces of course! Also, an interesting origin of "Jonah", but hey, anything is possible in the comic world!

Of to the Baltimore Comic con today. Gene, probably a good idea that you are not coming to this one, it is raining like crazy and suppose to continue to rain the rest of the weekend!

Keep dry Gary and have fun in between all the showers! Keep that art dry!

Love both pieces today. Someone will get a terrific piece of art and the Shelters will benefit too! A Win-Win if there ever was one.

Thanks Gary. Stay dry and enjoy the con!