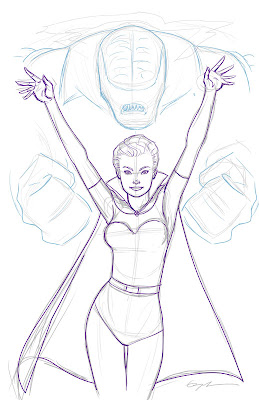 Princess Projectra & Validus © DC Comics
This is the digital sketch for the Princess Projectra Canson Cutie. I wanted her using her illusion casting powers but the question was what to have her cast. I remembered her connection to Validus in one of her earlier appearances. Validus saved Jeckie twice, once from the Sun Eater and again when Tharok commanded him to kill Jeckie and the other Legionnaires. Validus wouldn't do it and instead turned on Tharok and the other members of the Fatal Five. So I thought this was a nice call back to that story. By the way, that was the story that introduced the Fatal Five to the Legion mythos. It was also the story where Legionnaire Ferro Lad saved the universe by delivering a bomb into the "heart" of the Sun Eater and in the process sacrificing his life. Story and layouts by teenager Jim Shooter and art by Curt Swan and George Klein. Doesn't get much better than that! One of my favorite Legion stories.

This image was printed out and transferred to the final Canson paper via my light table. More tomorrow.

Jeckie was always my favorite Legionnaire (I even liked her as Sensor Girl)! Great job, Gene!!! :D

Carlos - I've always liked Jeckie. And her Cockrum designed costume. :) But for a while it seemed like her getting ill was the plot device for one too many stories.

I can't wait to see what Canson colored paper you select to do the finished piece!

Thanks for the heads up on the Color.