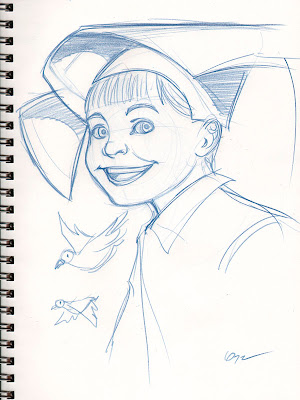 The Flying Nun © Sony Pictures
Another suggestion from Royce. You can tell how old we are by the shows he suggested and the fact I remember them fondly. I sketched this today but it looks like I will not get to the color yet. Too much work to do tonight. Oy!

I remember watching Sally Field starring as Sister Bertrille on the tv show THE FLYING NUN. She starred as a novice nun in Puerto Rico who could fly because of the aerodynamic nature of the heavily starched cornette she wore on her head and she weighed 90lbs. When she explained her ability to fly as "When lift plus thrust is greater than load plus drag, anything can fly", I believed it. But hey, I was 4 years old when the show started and 7 when it ended. One of the cool supporting characters on the show was Carlos Ramirez (played by Alejandro Rey). Carlos was a ladies man, a casino owner and the only one I knew of on television that shared my (middle) name. Except back then it was my first name. Well, legally I didn't have a first or middle name until I was 13. But I digress. I hope to add some color to this tomorrow.

And let's take a moment to wish Little John a speedy recovery. It was a Little John vs. The Ice grudge rematch today and the ice won again. Get well soon John!

Email ThisBlogThis!Share to TwitterShare to FacebookShare to Pinterest
Labels: pencils

I am glad that you picked this one Gene. Nice job on the good Sister. This was a very cute show that I watched "live" in it's heyday. I think this was right after Sally's Gidget run which I only saw in re-runs, but I might be mistaken. By the way, I just HAVE to hear the story about your "legal" name escapades sometime. Hope Little John recovers soon and that his loss to the ice was by a split decision, and NOT a KO!

I guess that flying explanation also worked for Mary Poppins!

Thanks for the kind words Gene. Love the Flying Nun piece.

At this point I think I need to see a depiction of Heat Miser kicking Cold Miser's rearend.

Royce, it was a split decision. I did a split and the decision was made to take me to the hospital. ;)

The Flying Nun was Sally Fields second tv series. I read that she was scared by an uncle into taking the part. Warned that if she didn't she may never work again. I didn't watch Gidget except in reruns. Funny but back then I didn't realized Gidget, I Love Lucy, Dennis the Menace and my other shows I watched after school were reruns. Or old shows. :) I will share my legal name story with you at HeroesCon if you remind me. :)

Gary, I think Mary had a magic umbrella. That's just silly. The Flying Nun was based in science, not fantasy. ;)

Little John, I hope you are feeling better! Thanks!