I am working on another Canson Cutie for Michael. This is Lana Lang, The Insect Queen. If you know your DC Silver Age of comics, you know that Lana was Superboy's girlfriend and that she was given the Bio-Ring by an alien she saved. This ring allows her to take on the shape (bottom half of her body mostly) and abilities of any insect. The catch, and not much of one, is that each form can only be used once a day. Not really a problem when you consider how many insects there are in the world. Lana tried out for the Legion but since she depends on a device for her powers she was rejected. She did gain Reservist status when she saved Superboy and the Legion later in the same story.

My take on Lana is playful. Above are the three ideas I submitted to Michael for his consideration. He liked "C" the best. Having Lana showing off her Bio-Ring in a playful manner worked for him. 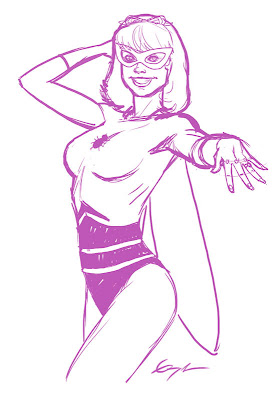 Lana Lang/Insect Queen © DC Comics
I took that rough sketch and tightened it up in Photoshop and printed it out on 11" x 17" copy paper. Next I will transfer the drawing to the Canson Paper and tighten it up even further as I go along. More to come.
This is Post #1187
Posted by Gene Gonzales at 3:59 PM