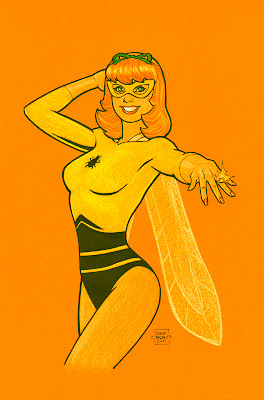 Insect Queen © DC Comics
Here is the finished Canson Cutie featuring Lana Lang as The Insect Queen. I love using this color for characters with red hair. It's such a nice base. This is number three of five Canson Cuties I am doing for Michael featuring female members of the Legion of Super-Heroes from the 1960s Curt Swan/Adventure Comics era. If you haven't seen the other two that I completed, here is The White Witch and here is Dream Girl.

Thanks again to Michael for these fun commissions!

This was done in ink, color pencil and some fluid acrylics on a sheet of 11" x 17" Canson Mi-Teintes paper.

Thanks LUD! I'm having fun too. I hope it shows.

Nice series of cuties! Your Queeny's a doll!