CATFIGHT OF THE BANDS!

I have been working on this piece off and on for the last month. This was commissioned by Michael, or as he is known here and on his blog, Swanshadow. Michael had seen a Josie and the Pussycats sketch I had posted and noted that it was along the same lines of an idea he had been kicking around for his Common Elements theme. (Check out his blog for the definition of his very cool Common Elements theme) He and I discussed this idea and I loved it. And we were off. 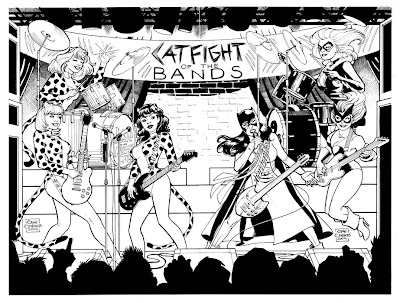 We have Josie & and the Pussycats vs Catwoman, Black Cat and the golden age Black Cat (collectively I've been calling their band 9Lives) in a battle of the bands. Or a Catfight Of The Bands. That had to be a heck of a show.
This is a big piece, 22" x 17", ink on Strathmore Bristol Board. Thanks again Michael, for a fun and different commission!
Posted by Gene Gonzales at 8:03 PM

A colored print in the wings?

Outstanding commission! You gotta do a color print at some point. Clawing their way up the charts to number one! Love Catwoman's guitar :)

For the benefit of the curious: Common Elements is a long-running series of commissions bringing together comics characters who share some feature in... well... common. This is Gene's second entry in the series (his first costarred Kitty Pryde and Phantom Girl), and the 87th overall.

Once again, Gene, you flat-out rocked this assignment. I can't think of another artist who would have done the concept justice with the panache that you did.

And if there's a color print in the offing, I expect first dibs!

Very cool. I always like seeing Micheal's stuff. And this is one of the best in awhile! Good job Gene!

"9 Lives" for the band opposite of Josie and the Pussycats? I love it!

You really nailed Josie's hair, and I like your version of Valerie. Overall, a fantastic commission! I am jealous!

THAT may be your best blog piece ever. Inspired!

Thanks everyone! Don't know about a print anytime soon though. :)

I keep coming back and looking at this one!

Love Melody spinning the drum sticks. Gene is pretty good at putting in little "Easter eggs" in his pieces.