More pieces from HeroesCon today. I think we will have one more day of these posts as some art is trickling in.
First up is a Julie Newmar Catwoman for Anthony! 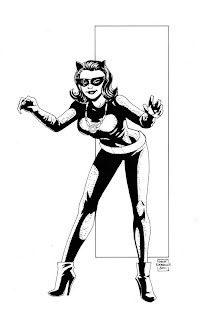 Catwoman © DC Comics
Second is old shellhead himself, Iron Man. This was for Joseph. 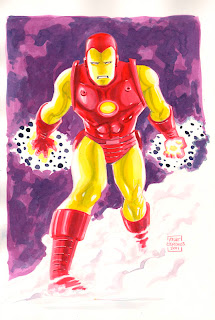 Iron Man © Marvel Entertainment
And last but not least, this was a surprise request. Bill commissioned a geisha swordswoman for himself at HeroesCon and when his friend Gloria saw it on my blog, she contacted me to do a second one as a gift for Bill. Oh, Gloria is in the Philippines. That makes it the longest distance request for my HeroesCon sketch list. To say that Bill was surprised to pick this one up would be an understatement. He never saw it coming. :) 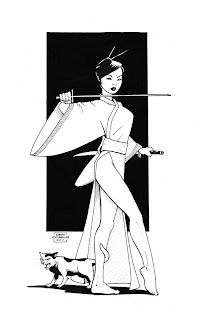 Artwork © 2011 Gene Gonzales
Thanks to Anthony, Joseph and Gloria for this batch of commissions. More tomorrow!
This is Post #1345
Posted by Gene Gonzales at 4:51 PM

Email ThisBlogThis!Share to TwitterShare to FacebookShare to Pinterest
Labels: HeroesCon 2011

Three beauties! Well, it Tony Stark can be called a "beauty." Cute story about the surprise swordswoman.

Neat story about the request from the Philippines!

The Iron Man painting is out of this world!

That Catwoman is AMAZING, Gene-! Love her-!

Lovely Catwoman (I am biased)! ;)
The bonus Geisha is a sweet, great surprise!