Another Legionnaire from the HeroesCon Advance Sketch List. The first of two that are for Michael! 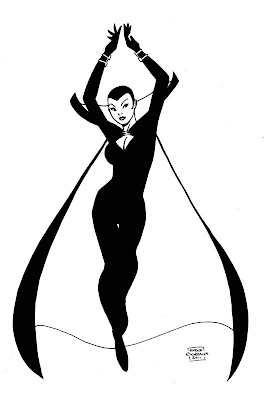 Shadow Lass © DC Comics
Michael asked for the Shadow Lass of the Levitz/Giffen era. An all black costume with a black cape presents a a bit of a challenge. I don't want to do a big black mass like having her wrapped in her cape. That was done a lot in the comic which is okay, but for a pin-up commission, not so much. So I worked out a way to have her curvy figure against the inside of her cape. The inside of the cape would be dark blue if it were in color. I think this worked out. And below I have posted the rough pencils to show that just because the figure is all black, doesn't mean you don't have to work out the structure.
Thanks Michael! 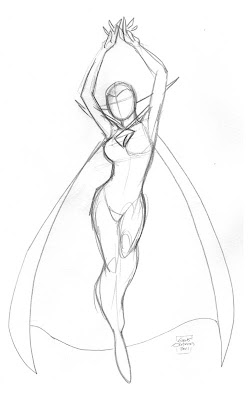 Always a pleasure to see a Legionnaire show up on the blog Gene. There are a lot of us Legion fans that tend to show up here. By the way, what did you guys think about the next to last Smallville episode where Jor-el convinces Kara to go to the 30th century to join the Legion? Would like to see a few episodes of that made!

There are a few of us Legion fans here, that's for sure. I liked the scene from Smallville that you mention. Nice finish for Kara.

Gene- this piece is striking! You are a true Legion artist!

Thanks Gary! We really need to get you into a place of power over the Legion books. :)