A Pair of Legionnaires!

Today we have a pair of Legionnaires for Michael. He was going to go with a pair from the Cockrum/Grell period but he casually mentioned liking the Five Years Later characters. Well, I enjoyed that run as well and that prompted my first sketches of the following characters.
First up is Kono. She is a rather mischievous girl and a thief at one time. Though her thieving days are behind her since becoming a Legionnaire, she still likes to cause trouble. In a playful way, of course. Kono's powers are almost of combination of Star Boy and Phantom Girl. To find out more about her, check out this page on MajorSpoilers.com. There is a good write up about Kono there. 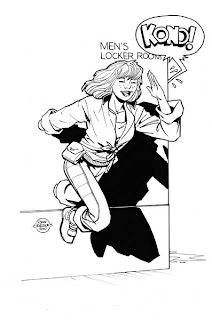 Next up is Devlin O'Ryan. He has the ability to repel attacks back at his attackers. It works with weapons, magic and brute force. Pretty handy ability. More about Devlin here at MajorSpoilers.com. 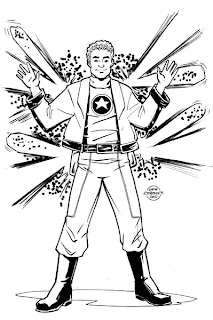 By the way, if you have never been to MajorSpoilers.com, you should check it out. It's one of my favorites. :)
Thanks to Michael for the pair of Legion commissions!
This is Post #1008
Posted by Gene Gonzales at 9:56 PM

Thanks for sharing your Legionnaire pieces Gene!

Just realized there is a "hole" in my Legion education. Gonna have to look up these characters!

It's very cool to see Kono again, I'd completely forgotten how much I enjoyed her character, and she was one of my favorites from the 5YL era.

And, though this is clearly stating the obvious, your rendition of her is great, Gene! You've managed to perfectly evoke Giffen's defining take on the character while still infusing her with your distinct brand of awesome!

Yeah Royce, it was an interesting story line that ended with the Zero Hour effect wiping out the original Legion continuity.

Thank Jonathan. There were some pretty good characters in that story line. This is one of the few times I have been asked to draw them. It's fun!