First up is Mary Marvel. I went back to her earliest look for my interpretation of the Shazam girl. Looking at some WOW COMICS covers really helped. Since a lot of artists do the lightning striking in the image, I went for a shot that takes place just after the lightning and transformation. 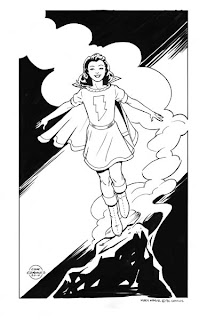 Next up is Isis. I attempted the version I remember from television. Not going for a likeness of Isis actress Joanna Cameron but going for the character's look back then, not the recent version. And while working on this I had to look at pictures of Ms. Cameron as Isis, which isn't a bad thing at all. I had such a crush on her back then. :) 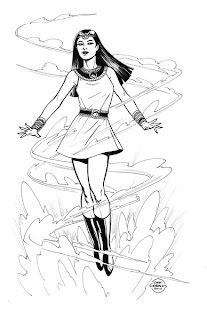 Both of these were done for Michael. And both were done with ink on 11" x 17" Strathmore Bristol Board. Thanks for the commissions Michael!

Gene, my friend, is it any wonder that I keep coming back? These are both stunningly spectacular!

Thanks for two welcome additions to my collection!

Oh Mighty Isis! and Mary is looking great too :)

Thanks Michael, I appreciate your kind words. I'm glad you are pleased with the girls.

Both of those are gorgeous. Congrats Michael!

The girls look great, Isis especially benefited from your memory and pictorial reference of the actress!

How was the Rays game?

Sorry for the delay in response. Seems Blogger wasn't posting any comments. Mine took hours to show up and then yours came in before. Don't know what is going on there.

Thanks LJ! Hey how did Patricia do in the road race?

Thanks Gary! The Rays won! It was a tough game too!

Pat did fine in the race. There was a lot of traffic jamming due to staggered start times of the runners. Cost a bunch of folks time in their race because the pack wasn't moving. Kind of like rush hour traffic.