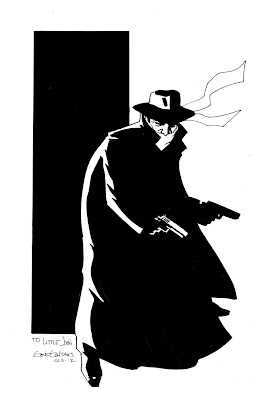 This one is for Little John. I have always been a fan of The Shadow. I read a lot of the paperbacks that were published in the 1970s. I thought they were so cool. And I loved when Batman teamed up with the Shadow in the Batman title. I have to admit I didn't see the Shadow comic from DC until much later. I saw the house ads but never saw an issue on the newsstand. It was much tougher getting comics back then in the old days. :) Thanks LJ!

Posted by Gene Gonzales at 9:32 AM

Sweet! I love it! Thanks Gene!