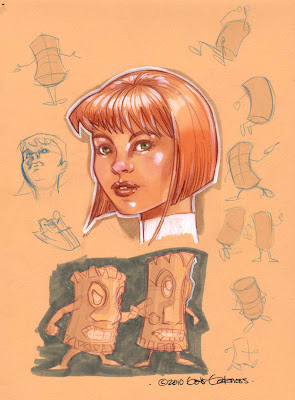 Artwork © 2010 Gene Gonzales
More sketching of some familiar looking guys. The sketches above were done on a sheet of Canson paper using Col-Erase pencils and white acrylic. Some of the color was done in Photoshop. I am trying different approaches for how I draw. I really would like to work on my own projects but I am not very interested in inking everything. There are several european comics that I follow that seem to print straight from pencils. Tight pencils that have been colored in a neutral shade. There are no stark black lines on anything and it looks really nice. I like the roughness and energy of pencils. Ah well, until I have time to actually devote to my own stuff, I will continue to play.

I have picked up another big project from a terrific client that will be a bit of a rush. I am working on one project for the same client and this one will tie into it a bit. I will be flying to Arkansas the first week of December and possibly late January as part of all this work. Needless to say, I will be pretty slammed through the first week of January.

My commission list is closed until February. I have taken on five Canson pieces and that fills my list. Whew! But these are going to be really, really fun!

Red hair, green eyes, and tiki guys! What is there NOT to like.

Glad that you picked up a big project!

Congrats on the work coup. Like Gary said so poetically...

congrats!! Sorry you will be so busy..at least you love what you are doing!

Wow! I am so impressed, Gene!

This is true, thanks Lisa!

Thanks Maureen! It was great to meet you!